Police recruits able to train in Launceston for the first time 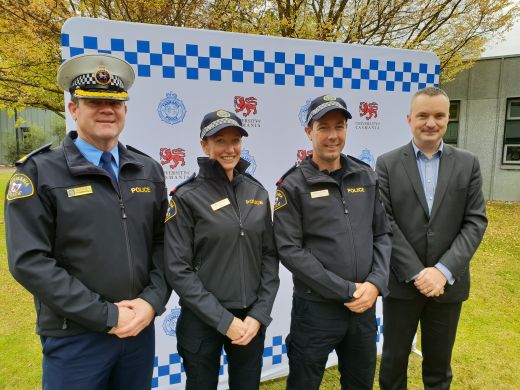 A pilot course for police recruit training in Launceston is under way, with the University of Tasmania welcoming recruits onto its Newnham campus for the first time.

In the past recruits from northern Tasmania have travelled to Hobart to attend the 31-week course in residential format at the Rokeby Police Academy.

The University is proud to be working in partnership with Tasmania Police to deliver the Associate Degree Social Sciences - Policing Practices in Launceston. Classroom training will be on the Newnham campus while other training activities will be at a separate police facility.

“The location of this course in Launceston will improve access for new recruits from the North, North-West and North-East of Tasmania,” the Head of the School of Social Sciences, Professor Nicholas Farrelly, said.

The Tasmania Police Education and Training Commander, Jason Elmer said: “We know people have been keen to join Tasmania Police but haven’t been able to move to Hobart to complete the recruit course, due to family or other commitments.

“Having this pilot course based at the University’s Newnham campus allows the trainee constables to remain living at home during their training, and they’ll be stationed in their home districts when they graduate as probationary constables.”

The University and Tasmania Police have partnered for the past 12 years to deliver educational and training programs at Rokeby in Hobart. The number of police personnel undertaking university study is growing.

“The integration of university study into police training is an international trend, both at the recruit level and among trained officers,” Professor Farrelly said. “Our policing units cover public policy, public sector management, police and government relationships and aspects of sociology and criminology.”

The 2022 Newnham courses in Semesters 1 and 2 are pilot courses and a decision about continuing them will be made at the end of the year.

The pilot course will be delivered through a combination of online and face-to-face learning, including live-streamed lessons to and from the Rokeby Police Academy.