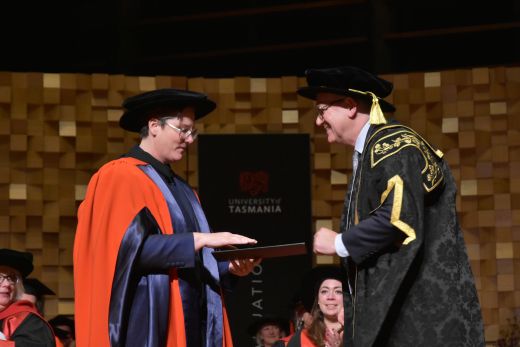 The University of Tasmania has awarded internationally renowned comedian, writer and actor Hannah Gadsby an honorary doctorate in recognition of her role as an ambassador for all LGBTIQ+ people world-wide.

Dr Gadsby has had a profound impact on contemporary popular culture, entertaining audiences across the world and asking them to think deeply about the trauma that comes from not being accepted for who you are. Dr Gadsby grew up in Smithton in north-west Tasmania, a young gay woman with autism in a place where homosexuality was illegal and the LGBTIQ+ community was persecuted.

In awarding the Doctorate of Letters honoris causa, the Vice-Chancellor, Professor Rufus Black, said that in all her work, Dr Gadsby was intent on helping to humanise the human race, helping all of us to acknowledge painful truths while never giving up on the possibility of healing.

The Honorary Doctorate was bestowed on August 14 at the 2021 Hobart Winter Graduation, where Dr Gadsby delivered the Graduation Address. She asked graduates the question Who do you want to be? “Don’t ask yourself what do you want to achieve, honestly the world already decides so much of that for you . . . Your story is always being written and re-written courtesy of the actions you take. Your story is as alive as you are. Never stop paying attention to it. Be alive, breathe, be somebody, and try your best to be someone you want to be.”

She also referenced the brutality of European invasion (including a call to change the Australia Day date) and Tasmania’s criminalisation of homosexuality until 1997. She said homophobia was politicised and weaponised to divide a vulnerable community in north-west Tasmania, but she can now say that she is proud of being from there.

Dr Gadsby was nominated for the doctorate by the University’s Ally Network in conjunction with the Executive Dean, College of Arts, Law and Education. The nomination stated that she had “deconstructed stand-up comedy from the inside out while simultaneously shining an unflinching light upon homophobia, sexism, violence, and misogyny – all pertaining to her own lived experience”.

Dr Gadsby studied at the University of Tasmania in 1998 and later at the Australian National University, where she graduated with a Bachelor of Arts, specialising in art history. In Nanette she speaks of being filled with fear and anxiety when she first started at university, “as I tried to carve my tiny little life into a world that felt far too big for me”.

Her success has taken her a long way from Smithton and Tasmania. Nanette ran for 18 months through 2017 and 2018 to sold-out houses across Australia and in London, Edinburgh, New York and Los Angeles. It was the 2017 Best Comedy Show at the Edinburgh Fringe Festival, and, after being launched on Netflix in June 2018, won a Peabody Award and an Emmy Award.

Analyses and commentary on Nanette and on the impact Gadsby had and continues to have on informing national and international conversations have appeared in The New Yorker, The New York Times, The Atlantic, Slate, The New Republic, The Guardian and Rolling Stone, among others. Nanette is just one in her long list of performances in solo comedy shows and as a television actor and presenter.