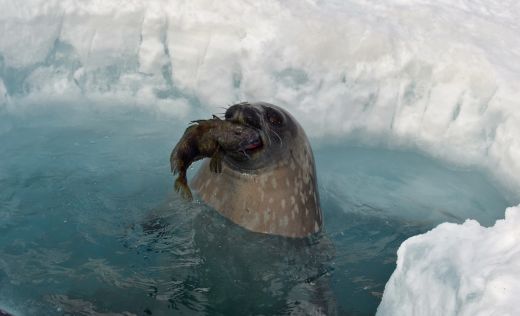 An innovative Institute for Marine and Antarctic Studies (IMAS)-led global study has used 25 years of marine predator tracking data to provide a novel solution to the problem of defining areas of ecological significance in the Southern Ocean.

An international team of researchers from 44 organisations combined more than 4,000 animal tracks from 17 species to identify where marine predators – and therefore their prey – commonly congregate.

Conducted by the Scientific Committee for Antarctic Research (SCAR) and published in the journal Nature, the study created an integrated map of ecologically important areas that can be used to inform conservation efforts.

"Our study relied on the simple principle that animals go to places where they find food," Professor Hindell said.

"Using data from electronic tagging to identify areas of the Southern Ocean where predators most commonly go, we can also tell where their prey can be found.

"For example, humpback whales and penguins go to places where they can feed on krill, whereas elephant seals and albatrosses go where they can find fish, squid, or other prey.

"If all these predators and their diverse prey are found in the same place, then that area has both high diversity and abundance of species, indicating it is of high ecological significance.

"We assembled tracking data from 12 species of seabirds and five species of marine mammals to identify where their prey concentrate, allowing us to pinpoint areas of particularly high biodiversity and biomass."

"Our study provides information that can help to ensure conservation measures such as Marine Protected Areas (MPAs) and robust fisheries management are well-targeted and appropriate.

"We also used climate change models to project how ecologically significant habitats may shift by 2100, finding that the existing MPAs with their fixed boundaries may not remain aligned with important future habitats.

"Ongoing tracking and dynamic management of MPAs will, therefore, be required in future to ensure continued protection of Southern Ocean ecosystems and their resources," Professor Hindell said.

As well as IMAS, the study included contributions from Tasmanian-based researchers from the Antarctic Climate and Ecosystems Cooperative Research Centre (ACE CRC), the Tasmanian Department of Primary Industries, Parks, Water and Environment, and the Australian Antarctic Division, and was supported by the Centre de Synthèse et d'Analyse sur la Biodiversité, France, and the WWF-UK.