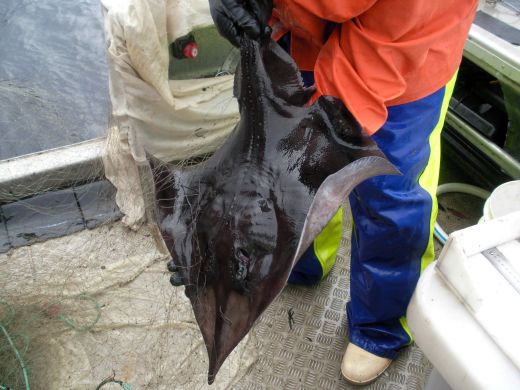 Environmental conditions in Macquarie Harbour have declined over the past decade and new research from IMAS has highlighted the vulnerability of endangered Maugean skate to the changed conditions in what may be its only remaining habitat.

The innovative study examined egg development and survival, physiological tolerances to varying oxygen and salinity conditions and, using sensors attached to adult skate, the links between dissolved oxygen conditions and the skate’s behaviour in the wild.

The results show the skate adapt their behaviour in response to environmental changes in the remote harbour, which experiences wide fluctuations in dissolved oxygen, temperature and salinity.

Report lead author Dr David Moreno said the current environmental state of the harbour, coupled with the effects of climate change, appear to be challenging the skate’s capacity to cope with its changing habitat.

“The Maugean skate is a rare and fascinating species, with one of the most restricted distributions of any member of the order of sharks, rays and skates that it belongs to,” Dr Moreno said.

“A range of behavioural and physiological adaptations have enabled Maughan skate to survive in such a challenging environment, including the capacity to tolerate the range of salinities and oxygen levels they normally experience.

“We found that while the skate have a preferred depth range, they move around the harbour in response to changes in dissolved oxygen conditions.

“For example, declines in mid- to deep water oxygen levels during summer saw all of the tagged skate spend time in shallow, well-oxygenated depths, before returning to their preferred depths,” Dr Moreno said.

Project lead Associate Professor Jeremy Lyle said that despite behavioural and physiological adaptations to surviving in such a unique and challenging environment, the study revealed signs of population stress.

“Our data suggest there may have been a recent decline in juvenile recruitment,” Associate Professor Lyle said.

“Skate lay their eggs on the substrate and, during the seven months that it takes complete development, are exposed to environmental conditions that will influence development and even survival.

“In addition, during the study there were several unexpected mortalities among the tracked individuals.

“Many of the deaths coincided with periods of marked environmental variability, raising the possibility they may have been related to stress caused by environmental factors.

“Our study contributes to the growing body of knowledge about the Maugean skate, shedding light on some of the unique adaptations that have allowed this remarkable creature to survive in such a challenging habitat.

“It also highlights uncertainties about the future conservation status of a species that is already listed as endangered,” Associate Professor Lyle said.

However, important questions remain and the report recommends further research surveys and an investigation into novel, non-invasive methods to assess population size and track population status over time and, if necessary, consideration of further conservation action.

Associate Professor Lyle said ultimately the success of any conservation strategy will depend on being able to effectively manage the environmental impacts of human activities in Macquarie Harbour.

The study was funded by the Australian Government through the Fisheries Research and Development Corporation (FRDC), with additional support from the Tasmanian Government, the salmonid industry, and the World Wildlife Fund for Nature.