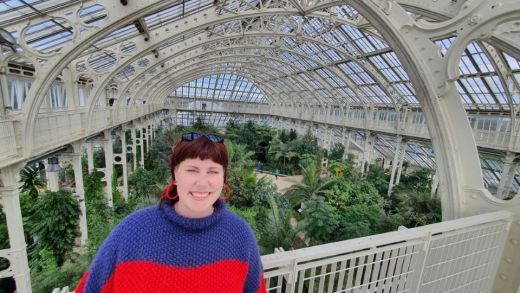 From analysing fossils to saving threatened plants – UTAS alumnus Matilda Brown has recently secured a prestigious job at the Royal Botanical Gardens, Kew in the UK.

Matilda completed their PhD within the Department of Biological Sciences at UTAS, with their thesis focusing on finding novel ways to analyse palaeobotanical data.

“The fossil record gives us windows into the past, but it’s like looking through a keyhole – we can’t measure the palaeoclimate, vegetation or ecology directly,” explains Matilda. ​​​​​​​

“However, we can use information preserved in fossils to help us infer these things – for example, if we identify a fossil as a plant that lives in tropical rainforests, it seems unlikely that the palaeoenvironment was particularly snowy.”

“Similarly, changes in plant communities can tell us about the evolution of species or genera, and we can analyse these patterns from the past to help us predict how species might respond to future climate change.”

Matilda’s latest publication uses the extinction of several conifer species from the Cenozoic to identify climatic factors that could threaten southern conifers in the future.

During her PhD candidature, Matilda was the recipient of a Westpac Future Leaders Scholarship, valued at $120,000 and aimed at supporting study, research and global experience.

Shortly after submitting her PhD in November 2021, Matilda commenced their new position as a Conservation Science Analyst at the Kew Royal Botanical Gardens.

“The analytical and methodological focus of my PhD has provided a great foundation for my new role,’ says Matilda.​​​​​​​​​​​​​​

“Now, I’m using the skills I developed during my PhD to investigate what makes plants more likely to be threatened with extinction, and how we can maximise the preservation of future biodiversity.”

While Matilda did once “teeter on the edge of vertebrate palaeontology”, she eventually decided on pursuing a career in plant science.

“The short answer is that plants, generally, don’t bite, evade capture or require as much paperwork as animals,” explains Matilda.

“My undergraduate degree was in both Palaeobiology and Botany – but I was keen to study at UTAS and once I met with my prospective Honours supervisors here (Greg Jordan and Tim Brodribb) I was totally sold on the leafier kingdom.”

Since moving to the UK, Matilda admits that the thing she misses the most is the strong sense of community found at UTAS.

“UTAS, and Biological Sciences in particular, has such a wonderful community that new friends and colleagues can’t replace,” says Matilda.

“Outside of UTAS, I’m desperately missing the mountains, no question! There’s a surprising amount of green space and nature where we are in the west of London, but the closest mountains are a few hours away – nothing like the proximity of kunanyi for a post-work ramble.”