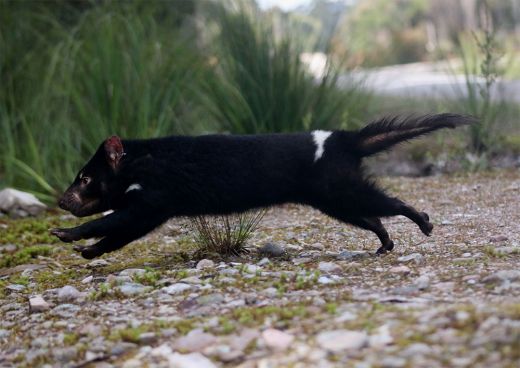 Amid the global COVID-19 crisis, there is some good news about a wildlife pandemic which may also help scientists better understand how other emerging diseases evolve.

Researchers have found strong evidence that a transmissible cancer that has decimated Tasmanian devil populations is not likely to lead to their demise.

The study, published in the journal Science, indicated that the devils’ pandemic is shifting from an emerging disease to an endemic one—meaning the disease spread is slowing to the point that each infected devil is infecting only one additional animal or less.

For the past 20 years, researchers from the University of Tasmania’s School of Natural Sciences have led field research into devil facial tumour disease (DFTD): an unusual and fatal transmissible cancer that has caused devastating population decline in Tasmanian devils.

Professor Menna Jones was instrumental in discovering the impacts the disease was having on devil populations and established a research program in 2004.

This has grown into an international collaboration funded by the US National Science Foundation and National Institute of Health as well as the Australian Research Council.

“In the early years of the epidemic we were very concerned for the future of the devil, however in the last few years our research has hinted that the devil is evolving resistance to the disease,” Professor Jones said.

“We now have strong evidence that the epidemic phase is coming to an end, and that DFTD is becoming an endemic disease. That means the devil will live with it as part of its normal life without this disease spelling the end.”

The approach they pioneered has opened the door for application to other genetically complex pathogens.

“I think we're going to see continued survival of devils, initially at lower numbers and densities than original population sizes, but extinction seems really unlikely even though it was predicted a decade ago.”

Since it was first identified in 1996, Tasmanian devil facial tumour disease has reduced populations of the iconic marsupial by 80 per cent. The devils spread the infection when they fight and bite each other on the face.

The disease is still largely fatal to Tasmanian devils who contract it, but it appears to be reaching an equilibrium. The study found that the R number (the number of secondary cases per primary case) has reduced from about 3.5 at the peak of the epidemic to around one, suggesting that the disease has reached a steady state.

The authors say this new evidence means managers should reconsider the practice of releasing captive-bred devils into the wild.

“Active management may not be necessary and could actually be harmful,” Professor Storfer said.

“It looks like the devil populations are naturally evolving to tolerate and possibly even resist the cancer. When devils that have never been exposed to the disease interbreed with wild animals in diseased populations, the evolution we have seen in wild populations is likely to slow down or even reverse, endangering those populations.”

University of Tasmania disease ecologist Dr Rodrigo Hamede has studied DFTD in the wild for more than 15 years, observing responses to infection at individual and population levels.

These adaptations are the best asset for devil populations and an enduring solution for future generations, he argues.

“Management interventions such as reintroductions should only be undertaken once scientific evidence demonstrates that the benefits of doing so are greater than allowing wild devil populations to recover through natural selection.”

Researchers have relied on field studies and modelling to try to understand the spread of the devil facial tumour disease, but this is the first time that phylodynamics has been used successfully to trace the transmissible cancer.

In this study, the researchers screened more than 11,000 genes from tumour samples to find genes that changed in a “clock-like” manner, showing mutations that were accumulating rapidly.

Professor Jones says the study findings were promising for the devil and also for the Tasmanian ecosystem.

“The decline and low populations of devils have led to a rise in populations of invasive predators like feral cats and black rats, which prey on native animals and are causing populations of bandicoots and small mammals like Antechinus and native rats to disappear at an alarming rate,” Professor Jones said.

“Recovery of the devil will reverse these trends and once again make Tasmania an island ark for mammal conservation in Australia.”