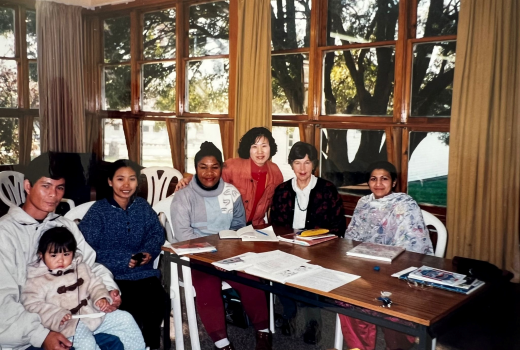 A vocal human rights activist and a valued friend of UTAS, Mrs Sara Strong breathed her last on February 1, 2022. She was 87.

I met Sara for the first time in 1995 when I started my PhD journey as an international student at University of Tasmania’s Newnham Campus. I travelled to Tasmania from Bangladesh with my wife and two little sons aged 3 and 8.

Soon after my arrival in Launceston, I got busy with my studies and my wife and children found it difficult to cope with the new environment without any members of extended family and friends.

One of the major components of those workshops involved English language lessons.Apart from learning the language, it was an opportunity for the families to spend time together on a weekly basis where they could mingle with, and get to know, each other. Sara also taught them the local norms, customs and slang and shared important knowledge about Australian history.

In fun-filled gatherings, a happy circle of friends and families emerged as a result. With her gracious, caring and welcoming approach, she soon became a very good friend to us all.

Her husband, Christopher Strong AM, the long-time Headmaster of Launceston Church Grammar School, was equally supportive of the welfare of international student families. The Strongs had a beautiful farmhouse in Lilydale which was about 20km away from Newnham. Often, Sara drove students in a minibus to their farmhouse and other places of interest in and around Launceston.

In essence, she created an oasis for international student families.

Sara was a wonderful human being. She lived a full life as a successful woman, wife, mother, farmer, human-rights activist, social worker, and adventurer.

Sara was born on the September 3, 1934 in Cape Town, South Africa. As a child, she lived in England with her parents for a few years before returning to Cape Town where she attended Wynberg Girl's High School.

In 1959, she graduated from the University of Cape Town with a Bachelor of Arts in English and French. Later on, she migrated to Australia with her husband and completed a Postgraduate Diploma in Education and a Diploma in Modern Languages. In 1982, they bought the Honeywood Farm in Lilydale and developed a small apiary business.

Sara was an avid traveller who lived and travelled across all continents and climbed and tracked mountains including Mount Kilimanjaro.

As a dedicated human-rights advocate and a promoter of multiculturalism, she was involved with several social, learning, environmental and human rights groups.

She visited detention centres to see the condition of the detainees firsthand and communicated with the government to pursue a more humane refugee policy. In one of her memoirs, she shared her feelings and frustration about refugees in the detention centre: "Freedom is the one thing they absolutely long for, and being kept locked up is their biggest torture."

Unfortunately, in 2011, Sara suddenly became ill with a rare spinal column disorder and became wheelchair-bound.  However, she remained mentally strong and continued pursuing her missions.

Sara was like our mum, while to many others she was a candle of hope and aspiration. Despite her disability, she was always positive about life and nature. In her last interview. with the Examiner journalist Jessica Willard in 2018, Sara drew everyone’s attention to the "many blessings" that she had "to be thankful for".

Let us celebrate the beautiful life and works of Sara whose precious memory and legacy of care and compassion will live on!

Dr Sharif As-Saber obtained a PhD from University of Tasmania in 1999. He is the president of Governance and Administration Innovation Network and a member of the Victorian Government ‘s South Asian Communities Ministerial Advisory Council.