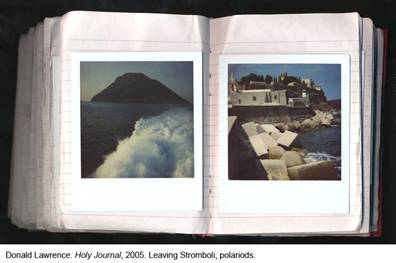 Lawrence combines his interest in foldable kayaks with such optical apparatuses as camera obscuras. His 1960s "Klepper" kayak is transformed into a floating camera obscura then paddled on the Tamar River & navigated by way of the inverted optical image.

Through a mixture of gallery & landscape-based projects his artistic practice explores the meeting place of urban & wilderness culture, often drawing upon his particular interest in sea kayaking. He has travelled with his folding kayak to such places as Alaska's Kodiak Island, Maine, & the Outer Hebrides off Scotland's west coast.

Lawrence has received numerous research & other grants including as the principal researcher of a Research/Creation project, through the Social Sciences & Humanities Research Council. Donald Lawrence has a BFA from the University of Victoria (1986) & an MFA from York University (1988). He currently Chairs the Visual & Performing Arts Department at Thompson Rivers University, British Columbia, Canada.