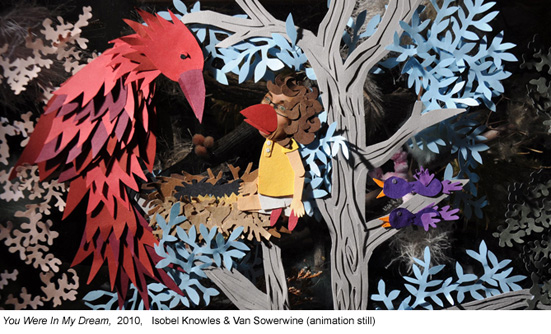 To coincide with Experimenta Utopia Now: International Biennial of Media Art at MONA participating artists Knowles & Sowerwine will be discussing their individual & collaborative artworks. Expanding on their ideas, inspirations, processes & techniques. p> Their work has been exhibited nationally & internationally. In 2010 their installation You Were In My Dream, commissioned by Experimenta Media Arts, won the 2010 Premier of Queensland's National New Media Art Award, Australia's most significant prize for new media art. They also won the People’s Choice Award.

In 2008 their animated film Doll Stories: Mary was shown as part of the International Digital Art exhibition in Beijing. In 2006 their installation Expecting was exhibited at the Institute for Contemporary Art, London & FACT, Liverpool. Expecting toured around Australia in 2004/2005 as part of the Experimenta: House of Tomorrow exhibition.

In 2004 Van & Isobel made the film Clara, a 7-minute stop-motion animation. It premiered at the Cannes Film Festival as one of nine short films in the Official Selection, where it won a Special Mention. Clara went on to win a Golden Hugo for Best Animation at the 2005 Chicago Film Festival. In January 2006 Clara screened at the Sundance Film Festival.

Their first collaboration, the stop-motion animation Gillian, was highly commended in the 2001 Dendy Awards as part of the Sydney Film Festival, and screened at NewFest 2003 in New York.