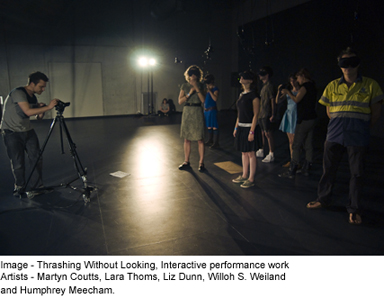 Martyn Coutts & Luke Smiles are in Hobart as part of Mobile States 2011 Mini-Festival. Both artists work collaboratively with theatre, dance, media & design & could engage in a discussion about interdisciplinary practice. They will be speaking on the role of video in their practice & especially live feed video in performance.

Coutts is an interdisciplinary artist working across Australia & the Asia Pacific.  He creates collaborative performance works which are cross media & cross platform. He is a founding member of the art collective Field Theory & founder & editor of the online Live Art resource LALA. He is also one half the research & art collaboration Deadpan with Willoh S. Weiland. In 2009 Martyn won a green room award for his video design on the Harry Harlow Project – a solo performance work that explores the life & work of American psychologist Harry Harlow. Written & performed by James Saunders, directed & designed by Brian Lipson, sound composition by Kelly Ryall.

Smiles is the sound designer of I left my shoes on warm concrete & stood in the rain, a performance that harnesses emotion as a physical force. Intricate dance, haunting words & a striking soundtrack take the audience on a journey through struggle & the creative resourcefulness it inspires in humankind. The evocative collaboration between movement, text, sound & light is accentuated by simple staging & encourages space for the imagination of the audience. The technical elements of the performance are exposed & define the reality of the physical space around the makeshift fantasy world of the performer. The work unfolds over a series of 'chapters' as the performance darts between scenes of fantasy filled darkness & physically charged light. The accompanying narration awakens images, commands action & guides the audience through the independent elements of a multi-textured experience.