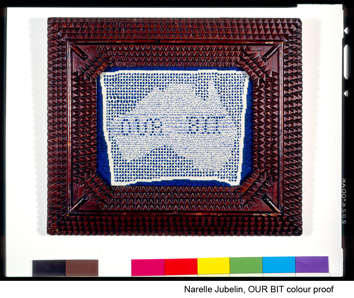 Jubelin's forum is titled 'Critical Distance'. It will tease out a collaborative body of work that was initiated by a lecture she heard in 1982, followed by a second version in 1985 & the ensuing of the body of work presented in 2001.

Since 1988 Jubelin has consistently sought to collaborate within the discursive spaces offered by University Galleries not as an academic but grounding her artistic practice in research as almost academic work. Since the mid 1990's Jubelin is visiting Professor for the School of the Art Institute, Chicago, Goldsmiths College at the University of London & Maumaus Post Graduate School, Lisbon. She was awarded a Paul Keating Fellowship in 1997 & an Australia Council Fellowship in 2001.

Her Art Forum lecture is entitled 'Critical Distance'. It will tease out a temporary body of work that was inspired by a lecture given by an Architectural Theorist in Sydney in 1992; followed by a second version of the same lecture heard in London, 1995; the translation & publication of the lecture by a small architectural journal in Madrid in 1996 & subsequently her own critical reference to & mobilization of the lecture in a collaborative work presented in Jerusalem in 2001. Narelle plans to explore the cumulative progression of her practice by thinking aloud & in public.