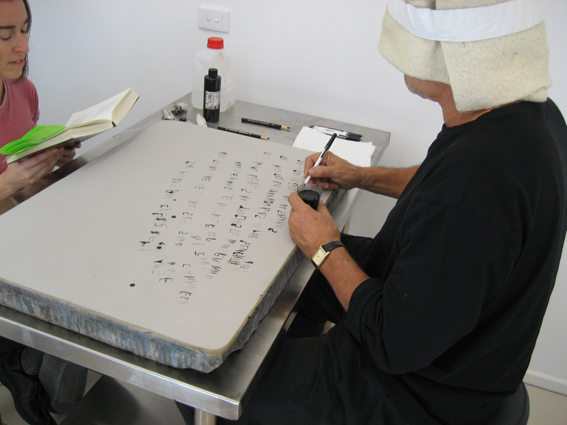 settevoltecieco (in praise of darkness)

I first conceived the project I will be discussing today, settevoltecieco*, as a tribute to the lifework of Jorge Luis Borges (1899 – 1986), Argentinian writer, critic, poet and dedicated it to the writer. His book of poems titled 'In Praise of Darkness' was the last he wrote. Fragments of poems from this book constituted the visual content of both the lithographs and the monoprints I made during a residency at the Art Vault in Mildura in May this year.

I have been making blindfolded works (drawings, paintings, keyboard performances and other action performances) since 1970. This is not the context in which to describe my practice but it's relevant to note that settevoltecieco is simply another component of an ongoing project.

Domenico de Clario was born in Trieste, Italy, in 1947 and migrated to Australia with his family in 1956. He studied Architecture at the University of Melbourne and in 1967 he was awarded an Italian Government Scholarship to study in art academies in Milan and Urbino, Italy. In 1998 he was awarded an MA from Victoria University, Melbourne, and in 2001 a PhD from the same University. From 1973 until 1996 he taught in the School of Art at Preston Institute of Technology (RMIT) and from 2001 until 2006 he was Head of the School of Contemporary Arts, Edith Cowan University, Perth. From 2006 until 2008 he was Head of Department of Fine Arts at Monash University. In December 2008 he was appointed Director of the Australian Experimental Art Foundation in Adelaide. Since 1966 de Clario has exhibited widely both in Australia and throughout the world and has published a number of books and CDs. He has received numerous international/national residencies and grants including the Australia Council Fellowship (1996-8). His paintings, drawings, prints and installations are included in major public and private collections both in Australia and worldwide.

An archive of past Art Forum videos is available to view.