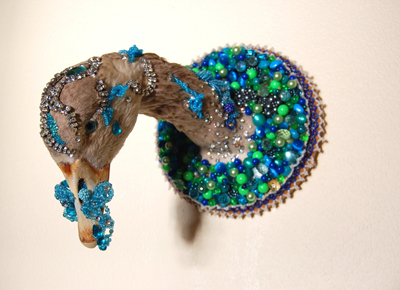 The extinction of species, environmental destruction, global warming and the roles and fates of animals in this context has seen a shift in the consideration of animals and human-animal relationships.

Reconstructing the Animal includes the work of a number of artists whose primary focus considers this ‘re-thinking’ of our relationships with animal life. The title of the exhibition alludes to the variety of ways in which these artists have ‘reconstructed’ animals. At times this ‘reconstruction’ takes place in a literal sense, such as the ‘recycled taxidermy’ works of New Zealand artist, Angela Singer, or the work of Finnish-born, New York based artist Harri Kallio, who presents images based on his reconstructions of long-extinct dodos. However, the exhibition is also a metaphorical reconstruction; we are asked as a viewer to reconsider or reflect upon our attitudes to animals

i'm not there by Snæbjörnsdóttir/Wilson will be shown at Hobart’s Beaumaris Zoo, the home of the last thylacine held in captivity. It comprises 20 colourful signs on a tall post containing names given to the thylacine by the colonists during their one and a half centuries of contact with the species. The installation Big Mouth (2004), from which these signs are taken, was originally shown in the celebrated Tramway 2 gallery in Glasgow.

'Reconstructing the Animal' was developed as part of the official 2010 Ten Days on the Island Festival program.