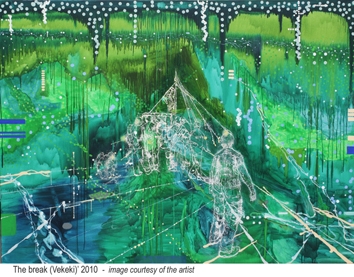 Jon Cattapan has established himself as a prolific and significant Australian artist having exhibited his paintings, drawings and prints extensively since 1978. Central to Cattapan's practice is a concern with the way in which humans negotiate space and territories. Cattapan's urban imagery depicts a fragmented, mobile, pulsing environment. Cityscapes filled with flows and vectors reflect the increasingly digital and global reality we are confronted with in the 21st century. This concern extends into more political terrain in works dealing with the ‘children overboard affair' as well as broader issues of immigration and border protection. Interweaving influences from contemporary culture ranging from cinema, digital media, travel and science fiction can also be located throughout his works.

In 2005 he received a grant from both Arts Victoria and the Visual Arts board of the Australia Council. Cattapan's work was brought together in a major survey exhibition, The drowned world: Jon Cattapan works and collaborations, at the Ian Potter Museum, the University of Melbourne, in 2006. In 2007 he was one of four Australian artists to participate in 'Venice Views' a residency project at the Venice Printmaking Studio, culminating in the exhibition 'Fondamenti Nove' held at the Australian Print Workshop. In 2008 a monograph 'Jon Cattapan: Possible Histories' written by Dr Chris McAuliffe was published by Miegunyah Press and also that year Cattapan became an official artist for the Australian War Memorial and was deployed to Timor Leste.

Image credit: The break (Vekeki) 2010 - courtesy of the artist