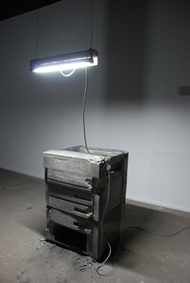 Image: Some Kinds OF Duration 2011, image courtesy of the artist

Nicholas Mangan will discuss reoccurring themes of his work such as ecologies, entropy and metamorphosis though recent projects such as, "A1 Southwest Stone" 2008, "Nauru, Notes From A Cretaceous World" 2009-2010 and "Some kinds or duration" 2011.

In a short exhibiting career Mangan's work has received much critical acclaim through writings in particular journals, such as Eyeline, Monument and Melbourne Magazine. The artist exhibited a substantial body of new works at Gertrude Contemporary Art Spaces, Fitzroy, in 2005. Mangan undertook a New York Studio Residency, funded by the Australia Council, in 2006.