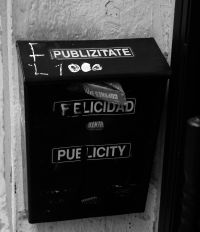 Ruben Santiago’s work scrutinises the mechanisms by which collective memory is formed and the consensual granting of its symbolic value. Through installations, site-specific projects, online mechanisms, video, objects and publications, Santiago critically analyses and exposes how networks of power are distributed in tandem with the regulations and legitimising systems of control in contemporary societies.

Strategically embracing long-term processes and ongoing methodologies, his practice – which he sees as an extended experience – becomes a negotiation tool in the artist’s active role in seeking to contest and recalibrate definitions of the real. Such recalibrations have taken shape in Drainage (2010) – a site-specific intervention commissioned by CGAC to be part of Santiago’s solo exhibition Cálculo which also included Non-computable incident (2010) – a work where Santiago was allowed to change the chemical composition of the public water in a city with 100,000 inhabitants. Non-computable incident questioned the potentiality of culture and subjectivity to achieve social transformation, and how these modes and identities can be put above public health issues when political interests are involved.