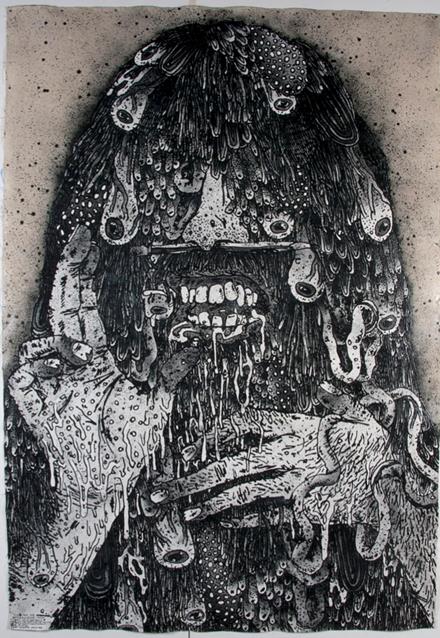 Tom O'Hern is a Hobart based artist whose practice spans murals, painting, animation and drawing. His work explores primitivism, masculinity and suburbia (scrawling penises on toilet walls). Tom completed a Bachelor of Fine Arts with Honours at the University of Tasmania in 2006 and was included in the 2011 Primavera at the MCA. He has shown widely in Australia and undertaken residencies in Hobart, France and China. Tom is represented by Bett Gallery, Hobart.

In 2012 Tom undertook a four-month residency at the Rosamond McCulloch Studio at the Cite International des Arts in Paris. In his time there Tom explored pagan and folk histories. Tom searched in vain for the ghosts of a pack of wolves preying on the residents of medieval Paris. The wolves were able to eat forty people before they were themselves lynched in front of Notre Dame. Tom looked at societal attitudes towards nature, and their parallels to Tasmanian history. The research has formed the basis of a body of work entitled Dead Dog currently exhibited at Bett Gallery.