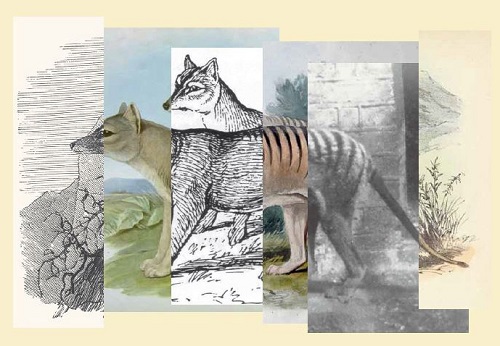 Tasmania. Her work is interdisciplinary, focusing on representations of extinct and threatened species, ethics in human-animal relations, and visualisations of animals in film. She has written academic papers, essays and articles for a wide range of publications—from edited books to exhibition catalogues—and co-edited, with Yvette Watt and Elizabeth Leane, the collection Considering Animals: Contemporary Studies in Human-Animal Relations. Her essay in the recent Animal Death compares the book and the film The Hunter.

In this presentation Carol will speak about the evolution of her book Paper Tiger: How Pictures Shaped the Thylacine, just released this week.  Paper Tiger traces and analyses published images of the thylacine from 1808 to 1936—early nineteenth and twentieth century engravings, lithographs and photographs in zoological, natural history publications and newspapers—and assesses how these pictures impacted on the lives of animals. The book includes unpublished drawings, compelling still images of the species in captivity and a hoax photograph. Research for the project involved travel to libraries and scientific institutions in UK and almost every state of Australia, as well as rock engraving sites in the northwest of Western Australia.

Dr Carol Freeman has had a long association with the University of Tasmania where she was employed in the Morris Miller and Royal Society Library in the 1980s and 90s. She was awarded a University Medal in 2000.