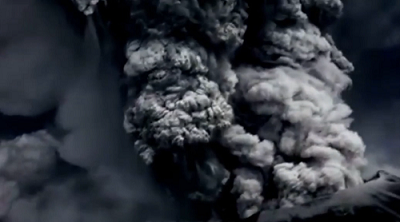 Modern media of mass communication – telegraphy, photography, radio, cinema, the telephone and television – have been astutely described as 'haunted': they are, or were, domains of disembodied voices, of actions detached from their distant agents, of ghosted images, and of white noise. But our contemporary media – the data clouds formed from interactive social media in which content, software and platforms are offered on demand yet held in corporately operated hyperlinked assemblies streaming into and out of individual computers – stipulate a different demonology. What ghouls inhabit the cloud's prospect of superabundant connectivity and accessibility? Viruses and bugs, or course, but also worms, seeders, hosts, leeches, trolls, parasites. The data cloud's communal spaces are inundated by paranormal pollutants and pathogens, and erupt in paranoia, contagion and pandemic possession. These demons manifest as if they were chemical storms in a miasma, a disintegrating turbulence or teeming torrent; or as oncogenic melanomata: as black noise.

Edward Colless is Head of Critical and Theoretical Studies at the Victorian College of the Arts, University of Melbourne. He has in the past worked in theatre, film, broadcasting and architecture, been a curator, worked as a travel writer, and dabbled in fiction – but mainly he writes in a genre that passes for art criticism and speculative theory. Increasingly, however, he uses every opportunity to research and to write on arcane topics, the more obscure and hermetic the better: antique heretical theology, art historical marginalia, demonology, crypto-zoology and crypto-archaeology.