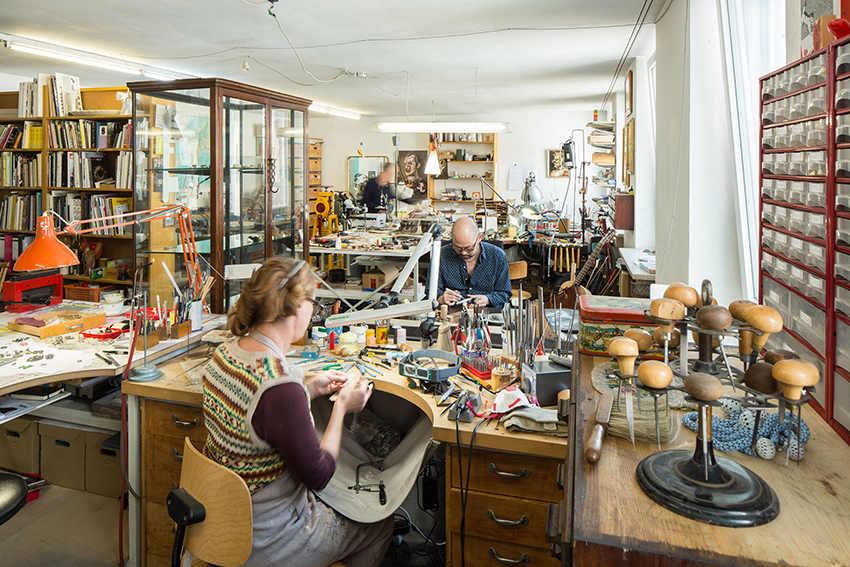 Australia, Switzerland and Japan. Three people working together for over 15 years in the same room, and before that working together in a much smaller room, during their studies. But all the time working separately too, the position of the individual work could not be more disparate: in Yutaka's case the meticulous reduction of a single material to a perfect form, in David’s case the transformation of exactly the right material in the pursuit of a instantly recognisable figurative picture, and in Helen’s case the obsessive, complex construction, both theoretically and practically, of heterogeneous worlds.

Three very different cultures, three very different educations. Each has always pursued an authentic private vision, having built their practice in a time before the global explosion of contemporary art jewellery, and the age of style surfing and the quick fix. Despite or perhaps because of these contrasts there are threads that run through, the foreignness of each to the other a strong fascination, as are the shared interests; cooking, collecting, music. And of course sharing a space making this kind of work is also sharing a life, now almost 20 years of life as foreign jewellers in Germany.

Helen Britton completed a Master of Fine Arts by research at Curtin University, Western Australia in 1999, which included guest studies at the Academy of Fine Art, Munich, the Sandberg Institute, Amsterdam, and San Diego State University, California. In 1999 she returned to Munich to complete postgraduate study at the Academy of Fine Arts. In 2002 she established her workshop in Munich with David Bielander and Yutaka Minegishi. Her work is held in the National Gallery of Australia, The Pinakothek der Modern, Munich, The Schmuck Museum Pforzheim, The Stedelijk Museum, Amsterdam, The Boston Museum of Fine Art, The Metropolitan Museum, New York, The Hermatige, St Petersburg, The Victoria and Albert Museum.In 2005 Helen was awarded the Herbert Hofmann prize for excellence in contemporary jewellery and in 2006 the state prize of Bavaria for craftsmanship.

In 2013 at the invitation of The Neue Sammlung, Munich, an overview of 20 years of Helen's work was shown as a solo exhibition in the Neues Museum, Nürnberg, Germany. In 2013 Britton was awarded the Förder Preis of the city of Munich, and in 2014 was artist in residence at Villa Bengel in Idar-Oberstein. In 2015 Helen Britton was invited by Ingo Maurer to make a solo exhibition of her "Industrial" series of jewellery and drawings in his showrooms in Munich, and was Artist in Residence at the invitation of Janet Homes a Court at Vasse Felix in Western Australia. In 2017 Helen created the exhibition "Intersticies" at The Lawrence Wilson Art Gallery, UWA, Western Australia - a complete overview of her practice in conjunction with the Festival of Perth.

After four years as an apprentice goldsmith with Kurt Degen in Basel and two years working for Georg Spreng in Schwäbisch Gmünd, David Bielander studied from 1995 until 2001 at the Academy of Fine Arts in Munich with Prof Otto Künzli, graduating as a master student in 2002.

In 2002 he established a collective atelier in Munich with the Australian artist Helen Britton and the Japanese artist Yutaka Minegishi.  From 2006 until 2010 David was creative assistant of Prof Daniel Kruger at the Burg Giebichenstein University of Art and Design, Halle/Saale, and from 2011 until 2013 external tutor in the Jewellery Department of the Gerrit Rietveld Academie in Amsterdam (NL).

Yutaka  Minegishi was born in Japan in 1973 and studied under Hiroshi Imura at Metak Craft course, Hiko-Mizuno College of Jewelry, Tokyo, 1991-94. During 1995-96 he was a guest student at Fachhochschule, Pforzheim, Germany and between 1996-02 studied under Prof. Otto Künzli at Akademie der bildenden künste, Munich, graduating as a master student in 2002.