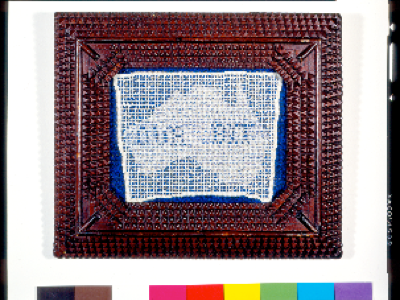 For over two decades Narelle Jubelin has stitched miniature petit points and combined them with ready made objects and textual citations in architectural, photographic and painterly installations. The exhibited works often mark the journeys that objects and images make through the world where this global tracking is always examined within critical feminist frameworks.  Her frequently collaborative projects involve narratives on education, vernacular traditions, modernism and the built environment, often fraught with exile and displacement.

Her ArtsForum lecture is entitled ‘Critical Distance’.  It will tease out a temporary body of work that was inspired by a lecture given by an Architectural Theorist in Sydney in 1992; followed by a second version of the same lecture heard in London, 1995; the translation and publication of the lecture by a small architectural journal in Madrid in 1996 and subsequently her own critical reference to and mobilization of the lecture in a collaborative work presented in Jerusalem in 2001.  Narelle plans to explore the cumulative progression of her practice by thinking aloud and in public.