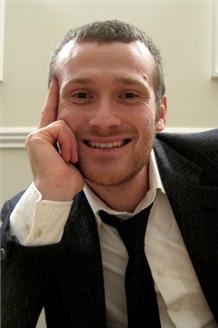 Ross Byers completed his BCA at UTAS in 2002. After spending part of this degree at the University of Hawaii USA, Ross attended The Australian School of Fine Furniture in 2003, and received his MFAD at UTAS in 2006.

Byers was Artist-in-Resident at Arthur Boyd’s Bundanon Estate NSW, in 2009 and lived and worked in Glasgow, Scotland, from 2010 to 2012. During this time he exhibited at The Royal Scottish Academy Edinburgh, worked at the Scottish National Gallery of Modern Art Edinburgh and was short-listed for The Anna Lobner/Düsseldörf Exchange between Glasgow and Düsseldörf, Germany, in 2011.

Byers’ practice is currently focused on the perpetual shift between the inanimate and living in urban spaces, expressed via small-scale, modular sculpture. The works feature prominent architectural and geographical motifs. Often containing earth and living botanical elements, these ceramic works are strongly influenced by life in Glasgow and primarily produced whilst living there.

Byers’ focus is about to shift once more, this time to the ocean.  He will be working in a collaborative team of scientists and artists on The Clipperton Project in November 2012. Based on Cozumel Island, Mexico, Byers will be diving on the coral reefs testing the affects of plastic pollution, and will be producing works in response to findings of the team.

Ross Byers is the current Artist-in-residence at the School of Visual and Performing Arts and will talk about his past work, current residency and future projects.