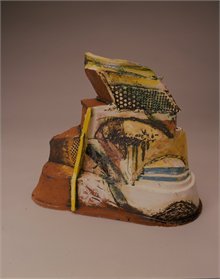 The School of Visual and Performing Arts (SVPA) wishes to acknowledge the significant contribution to the creative arts and the Tasmanian community by Emeritus Professor Vincent McGrath who passed away in 2012. In a forty plus year period of service to the arts Professor McGrath contributed significantly to increasing the professional understanding and appreciation of the arts as an academic research activity in Tasmania, across the nation and internationally.

Professor McGrath was truly passionate about the arts, both as a practicing artist and an educator. Victorian born, a graduate of RMIT in 1969, Prof McGrath spent eight years teaching in Darwin, becoming head of the art school with the University of the Northern Territory, now Charles Darwin University. He came to Launceston as head of school in 1984, initially with the Tasmanian College of Advanced Education, which became the Tasmanian State Institute of Technology in 1985, and in turn merged with the University of Tasmania in 1991.

Professor McGrath was promoted to professor in 1991, and after receiving a Doctor of Creative Arts in 1992 (University of Wollongong) served as Executive Dean of UTAS' creative arts faculty until 1995, when he returned to head the SVPA.

Professor McGrath was a respected and successful artist, with work represented in all State galleries of Australia, the National Gallery of Australia and several important international collections. He exhibited in numerous solo and group exhibitions and in a distinguished career received several high profile public commissions to create beautiful ceramic installations and murals. He also contributed his considerable knowledge of the arts by way of curating exhibitions, writing conference papers, essays, articles and critical reviews. His own visual work was the focus of many feature articles.

Professor McGrath's teaching and supervision skills were evident and he guided many postgraduate candidates successfully through their studies for UTAS and other Australian universities. He also was Chair and member of several government arts committees, including the Australia Council's Visual Arts/Craft Board.