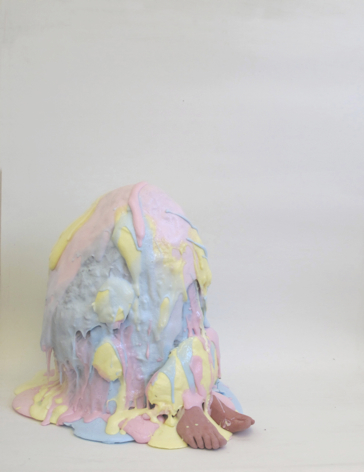 Signs of Life: The Art of Artificial Animism

Referencing visual motifs derived from a variety of discourses, including animism, metamorphosis, and fantasy narratives, her artworks posit a conceptual extension of subjectivity by ascribing a sense of agency to natural and unnatural phenomena. Seeking to question culturally ingrained dualisms and categorizations, many of Valentina’s works feature elements of transformation and a conflation of binaries such as subject and object, human and non-human.

Valentina Palonen is a Finnish-Australian artist living and working in Melbourne. She has exhibited widely both locally and nationally including in the innovators program at Linden Centre for Contemporary arts and has been featured in Runway magazine. Her work has been acquired for various private collections including the Elliott Family Ten Year Collection and the Popper Family Collection, and she was recently awarded a residency at the Cité International des Arts in Paris by the Power Institute, The University of Sydney. Valentina has completed a Master of Fine Art (by research) at the Victorian College of the Arts, The University of Melbourne.

For the ArtForum Valentina will discuss artworks made as part of her Masters studies, and her research project while on residency at the School of Visual & Performing Arts.