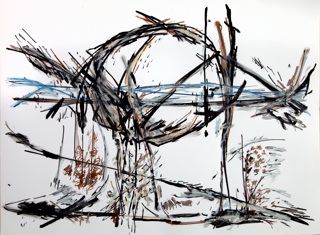 Dr Stephen Hobson’s recent self-portraits (produced since 2000) depict the artist in relation to the rabbit as muse, emigration to Australia in 2000, and a life-long desire to find the mythical place called ‘home’.

The self-portraits challenge the masculine identities projected over time onto the nature of the rabbit, through its use in making 'bush' hats, such as the iconic Akubra brand, and the rabbit’s denigration in Australia as a European pest. The images suggest that these artistic representations of ‘rabbit hats’ offer an unseen psychic rift in their relationship to the Australian male ‘battler’ and traditional notions of masculinity associated with the tough hardwearing hat and their owners.

Furthermore, the drawings and paintings seek to reframe the Australian hat, and thereby challenge its cultural position, as the ubiquitous 'male' hat becomes playfully and perversely ‘feminised’ through the anthropomorphic development of breasts that protrude through the hat’s crown, as well as sporting pendulous ears that often loll over the hat’s brim. Put bluntly, the artworks suggest that men keep their ability to nurture and offer succour under their hats.

Stephen currently supervises Research Higher Degree students at Queensland College of Art, Griffith University, works as an art consultant and continues to make artwork for exhibition and publication. Stephen has curated over fifty exhibitions and is a contributor and editor to a range of publications.