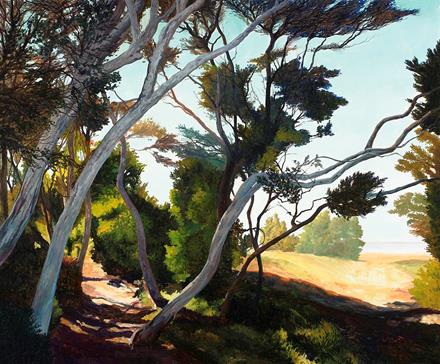 David Keeling will be presenting a floor talk in the gallery on his exhibition David Keeling: Inside Out. The exhibition will span artwork from three decades including painting and sculpture, focusing on the major themes that have driven Keeling's artistic output.

David Keeling (b1951, Launceston) has achieved significant national recognition for his landscapes, which have become a powerful voice in the development versus conservation debate, especially within the Tasmanian context. Exhibited in Inside Out will be a body of new work focusing on the coastal landscape of the mid-north coast of Tasmania.

Keeling graduated from the former Tasmanian School of Art, Hobart in 1976. He also holds a Post Graduate Diploma, Alexander Mackie College and a Masters of Fine Art, RMIT, Melbourne. His development as an important post-modern Australian painter has been acknowledged by several prestigious prizes including in 2006 the Glover Prize; three European studio residences in London, Rome and Verdaccio funded by the Australian Federal Government; national and international exhibitions; and wide representation in public and private collections including the National Gallery of Australia, National Gallery of Victoria, Art Gallery of South Australia, Queen Victoria Museum and Art Gallery.

David Keeling: Inside Out is presented as part of the Academy Gallery Mini Blockbuster (MB) series. The MB Series aims to promote and educate the contemporary arts as accessible cultural enjoyment.

Presented by the University of Tasmania as part of Ten Days' Tasmanian International Arts Festival.