Super Media World is a visual exploration that takes place within the electronic, mass media environment that currently surrounds everyday life. More specifically it focuses on the use of media such as the Internet, TV and cinema, as tools for interaction and communication. As such, the project investigates our relationship with screen-based technologies like computers, televisions and hand-held devices, and how they can influence and mediate dialogue and exchange between an artist and images, between viewers and artworks, and between people in day-to-day life.

Using images and footage collected and appropriated from digital media, I create 2 dimensional, 3 dimensional and virtual artworks, combining, manipulating, and re-imaging digital material. This has led to an exploration of Ron Burnett's (2007) notion that digital technologies and programs aid artistic production, as they '…encourage transformative and playful forms of interaction.' Another important approach used throughout this project is the 'Media Archaeology' method of research, which involves looking at the special relationship between visual media and time. This approach has introduced new questions for this research project: Can the Internet be used as an archive? How does altering the pace and tempo of a video artwork change it's meaning? How do changes, improvements, and advancements to digital technologies over time influence the way we use them to communicate and create? 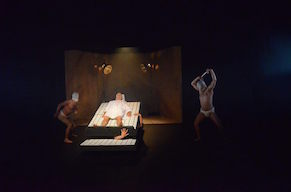 The Bastard Performer: Style and Technique Mixing in the new global landscape of theatre and performance art.

The contemporary actor/performer has an overwhelmingly varied range of approaches to choose from. They have become a vagrant – a performer with no home, who identifies and is allied with many forms, approaches, techniques, methods and styles. This performer is the illegitimate child from many parent schools of thought – however these need not be used in an exclusive manner.

Every instance in a performance is important. It is scrutinized and assessed on so many levels, in that same instant, by an audience/spectator. So it should be treated as a precious chance to communicate on as many of those levels as possible – therefore why not look at ways for the contemporary performer to maximize control over the flow, layering and density of information encoded within these moments drawing from a whole gamut of approaches, techniques and devices in real-time.
Using the whole range of aforementioned approaches, forms, techniques and methods to create 'theatrical texture' within singular performance work. 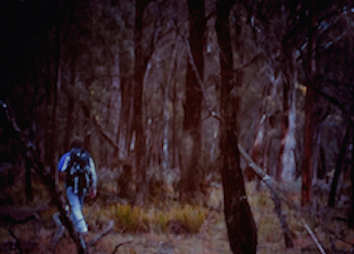 Between the Lines: the reading and reimagining of landscape as text

The project was a site-specific exploration of the Northern Midlands agricultural property of Oakdene, which became a vehicle to investigate hybrid forms of art practice and intersecting narratives relating to landscape. The Midland region of Tasmania is a tapestry of private farmland and Oakdene was selected as having representative qualities of the greater Midlands ecology. Moving between riparian, pastoral and forest spaces across 4000 acres, the project observed human/non-human transformation in a highly contested landscape.

Considering the agricultural landscape as text, the project sought to develop suitable methodologies for navigating and responding to continuous change within the boundaries of the property. Through a constant process of re-visitation, walking emerged as my primary mode of engagement, and developed into a methodology for experiencing, mapping, recounting, reframing, and retelling the Oakdene landscape(s). I found working across different mediums to be the most appropriate way of negotiating the tensions between natural ecologies and human intervention revealed over time. Through a myriad of on and off-site studio experiments I explored means of landscape representation using photography, sculpture, and video in response to the fluctuating aspects of the site.

Oakdene emerged as an example of ecology under strain, containing intersecting narratives that became central to my investigations. The outcome is a series of speculative works generated by a confrontation with the limits of singular approaches to making and landscape representation, arising from an unexpectedly dynamic Midland environment.