Heavenly gospel to reverberate from down under 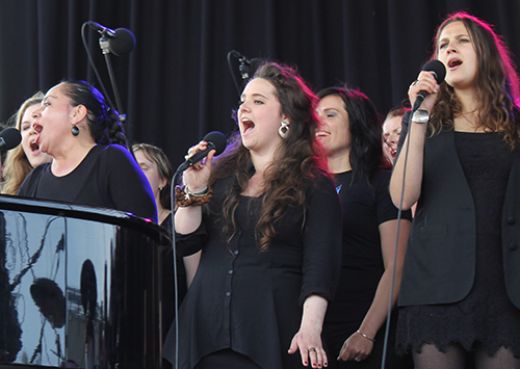 “These days you don’t have to be in the same city to write a song or collaborate on something creative, but a relationship and connection with them will always be vital,” he said.

Associate Professor Legg has collaborated with thirteen-time Grammy-winning artists Kirk Franklin, Myron Butler and Khristian Dentley in a songwriting team since 1997, having worked in New York and Dallas, before basing himself in Hobart.

“Our international collaborators have made the SGC better and more authentic. We have worked hard to strengthen our international connections so that we can perform African American gospel at the highest level – powerful and heartfelt – and all from Tasmania.

“African American music speaks to freedom, justice and the strength of community. It is about hope, justice and equality. It profoundly resonates with isolated and oppressed peoples across the globe.”

In 2014 the SGC toured to southern USA where performances were direct-streamed to millions worldwide, receiving overwhelmingly positive reviews from critics and audiences, not to mention album sales.

“Performing in our own right in Mona’s Nolan Gallery is yet another step up for the SGC,” Associate Professor Legg said.

“The Nolan Gallery has a unique acoustic, and that’s what we are going to use. This concert will be all about the voice and how it sounds in that beautiful space – stripped down, no band, just voice and piano.”

The University’s Coordinator of Contemporary Voice, Maria Lurighi, will lead the strongest of Kirk Franklin’s melodies, along with gospel songs by American artists Richard Smallwood and Steven Ford. Eight-time Grammy winner Ford is also a PhD candidate with the University of Tasmania and University of Delaware. His primary PhD supervisor is Associate Professor Legg.

Love Theory will be performed at 7:30 tonight and tomorrow. A waitlist is available on the Mona website.