Two Tasmanian authors of the UN report on oceans and climate change discuss the implications for Australia and its surrounds. In September 2019 the UN Intergovernmental Panel on Climate Change (IPCC) released its Special Report on the Oceans and Cryosphere in a Changing Climate (SROCC). The report assesses the physical processes and impacts of climate change on ocean, coastal, polar and mountain ecosystems. It also assesses the consequences for human communities, and the options for people to adapt to climate-related changes for a more sustainable future.

Both Nathan and Jess are alumni of the University of Tasmania. Professor Nathan Bindoff is one of the world's leading climate change scientists and a physical oceanographer. Professor Bindoff has been studying signals of change in the ocean, like oxygen levels, temperature and salinity, from measurements from the 1970s to the present. His focus is on detecting and understanding the causes of change in the oceans. As well as in 2019, he was the coordinating lead author for the Fourth and Fifth Assessment Reports from the IPCC. He led the oceans chapter (2007) and the detection and attribution chapter (2013), contributing to the IPCC winning the Nobel Peace Prize in 2007, shared with Al Gore. Professor Bindoff and his colleagues developed the famous statement: 'Global warming is unequivocal.' 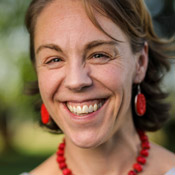 Dr Jess Melbourne-Thomas grew up exploring Tasmania’s coastline and wilderness, and has gone on to work in the marine environment from the tropics to the poles. With a background in mathematical modelling and Antarctic climate change science, Jess is now a Knowledge Broker for the CSIRO, helping to bridge the gap between complex scientific research and decision-making for sustainability. A passionate advocate for diversity and gender equality in science, Jess co-founded the Homeward Bound project, which took the largest ever all-female expedition on a leadership journey to Antarctica in 2016. She was one of Australia’s first 30 Superstars of STEM and was named Tasmania's Young Tall Poppy of the Year in 2015 for her excellence in research, science communication and policy engagement. Jess was one of 12 female scientists globally to have her portrait featured as a constellation on the ceiling of New York’s Grand Central Station as part of GE’s Balance the Equation campaign. Jess was Tasmania’s Australian of the Year in 2020.