The consequences of saying "yes". That's how Professor Dale Fisher likes to describe his unique journey from graduation at the University of Tasmania to helping lead the world's fight against COVID-19.

Professor Fisher has been Chair of the Global Outbreak Alert and Response Network since 2018. In February this year, he was part of an international technical team that traveled to China to understand the COVID-19 outbreak. He is widely credited with Singapore's success in containing the disease, and has been a major contributor to understanding it through his media appearances internationally. 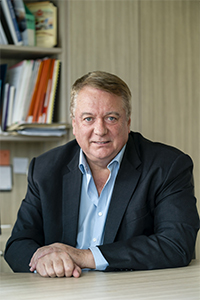 Dale Fisher attended high school at Hutchins, before earning a scholarship to attend the United World College of South East Asia. He returned to join the school of Medicine at the University of Tasmania, graduating in 1985. As a result of an arrangement between the Northern Territory and Tasmanian Governments he took an intern position at Royal Darwin Hospital. After specialist training in infectious diseases in Sydney, he returned to Darwin where he spent a decade making regular Aboriginal community visits and working closely with many Aboriginal leaders. He worked on the evacuation of East Timor in 1999, the Bali bombings in 2002 and even spent two weeks looking after American entertainer Jerry Lewis, who contracted meningitis while on tour.

Professor Fisher first worked in Singapore in 2003, arriving as the SARS outbreak was hitting. He is now a senior consultant infectious disease physician and chair of infection control at the National University Hospital in Singapore. He is also the national Chair of the Infection Prevention and Control committee and has been heavily involved in infection control and outbreak response training internationally for more than a decade. He has been a part of many missions responding to outbreaks across Asia, as well as during the West African Ebola response.

He has almost 200 peer reviewed publications in the medical literature and has given around 100 plenary and invited lectures at scientific meetings.