The multilateral system, with the UN at its core, provides collaboration with a set of norms and values for member states to address the world’s biggest challenges through signing up to the Sustainable Development Goals. 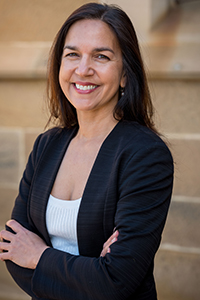 But how effective is multilateralism in addressing modern slavery? And can governments meet these challenges alone in a world dominated by multinational corporations and global supply chains?

Head of Government Advocacy at Walk Free and former Australian Senator Lisa Singh will address the importance of research and compiling data to answer these questions, as well as how business, government, NGOs and other groups can work together to eradicate some the world’s most heinous crimes.

The Hon Lisa Singh served as an Australian Senator from 2010 until 2019 representing the state of Tasmania. She previously served as a Tasmanian Member of Parliament for the seat of Denison from 2006 and as a Minister in the Tasmanian Government.

Lisa was the first woman of South Asian heritage to be elected to the Australian Parliament. Her parliamentary career focused on the promotion and protection of human rights, foreign policy, trade and international development. To this end, and as a key member on the Joint Parliamentary Committee on Foreign Affairs, Defence and Trade, Lisa was instrumental in the development of Australia’s Modern Slavery Act.

She is currently the Head of Government Advocacy, Australia-Pacific at Walk Free, an international human rights organisation working to end modern slavery. She is also the Deputy Chair of the Australian Government’s Australia-India Council.