From Antarctica to Outer Space: Exploring gender equity at the extremes

Add to Calendar 2021-08-16 18:00:00 2021-08-16 19:15:00 Australia/Sydney From Antarctica to Outer Space: Exploring gender equity at the extremes How do we overcome the pervasiveness of heroic white masculine leadership and exploration at the ends of the Earth and beyond? This talk will explore what the most extreme environments in the world can tell us about making STEMM workplaces more diverse and inclusive. Stanley Burbury Theatre, University Centre, Sandy Bay campus
Book Now
Venue:

How do we overcome the pervasiveness of heroic white masculine leadership and exploration at the ends of the Earth and beyond? This talk will explore what the most extreme environments in the world can tell us about making STEMM workplaces more diverse and inclusive.

Men often dominate the annals of exploration in Antarctica and Space. The pervasiveness of heroic white masculine leadership and exploration at the ends of the Earth and beyond, as well as more generally in Science, Technology, Engineering, Mathematics, and Medicine (STEMM) research cultures, has meant that women and other historically excluded groups have had less access to research and remote fieldwork opportunities. For instance, although women are becoming more visible in Antarctica, they comprise only 25% of Australia’s expeditioners. Similarly, almost 90% of astronauts worldwide have been men. This session explores what the most extreme environments in the world can tell us about making STEMM workplaces more diverse and inclusive. 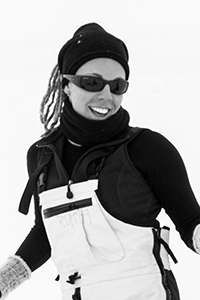 Dr Jess Melbourne-Thomas is a Transdisciplinary Researcher and Knowledge Broker with CSIRO Oceans & Atmosphere. Her research background is in mathematical modelling and Antarctic climate change science and she was a Lead Author for the 2019 IPCC Special Report on the Oceans & Cryosphere in a Changing Climate. Jess co-founded the global Women in Polar Science network and the Homeward Bound project, which took the largest ever all female expedition on a leadership journey to Antarctica in 2016. She was one of Australia’s first 30 Superstars of STEM, had her portrait featured as a constellation on the ceiling of New York’s Grand Central Station as part of GE’s ‘Balance the Equation’ campaign, and was the 2020 Tasmanian Australian of the Year.

Meredith and Jess will be joined by panellists: Noor Masdiana Md Said is a graduate student at the University of Tasmania in the School of Physics working on a geodetic project called "Achieving millimetre geodesy with space tie satellites." This project aims to implement a completely new concept of observing artificial satellites with radio telescopes. For the last ten years, she has been involved in several research projects concerning the Earth's geomagnetic field and the adverse effects of solar activity on Earth, as well as optical spectroscopy and photometry studies. In September, she will take up a postdoctoral position at the Joint Institute for Very Long Baseline Interferometry European Research Infrastructure Consortium (JIVE) in the Netherlands, working on a project combining astronomy and planetary science associated with the European Space Agency Jupiter Icy Moons Explorer (JUICE) mission. 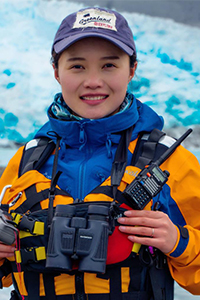 Dr Chen Zhao is a postdoctoral researcher in the Australian Antarctic Program Partnership at the Institute for Marine and Antarctic Studies, University of Tasmania. She is a glaciologist and couple ice sheet ocean modeller. Chen’s current research explores the sea level contributions from the Antarctic Ice Sheet in a changing ocean and evaluates the impact of ocean systems on large ice sheets with numerical modelling. Chen has also worked with Quark Expeditions as an onboard lecturer and expedition guide on voyages to the Antarctic Peninsula as well as Greenland, Iceland, and Svalbard in the Arctic. Chen is devoted to  delivering knowledge about the impact of climate change on the polar regions to a broader audience.

Arrival recommended from 5.30pm to allow time to proceed through temperature screening and to check in via the Check in Tas App.