On June 22 this year, Her Excellency The Honourable Barbara Baker AC Governor of Tasmania, announced that the 50th Parliament of Tasmania will receive a report on ‘the views of Tasmanian Aboriginal people on a Truth Telling process and on what a pathway to a Treaty would consist of.’

Michael Mansell will present the 2021 Japanangka errol West memorial lecture at a critical time in Tasmania’s history. For the first time, the government has publicly committed to a process that may lead to a Treaty with the Aboriginal people of lutruwita/Tasmania. Michael will outline his views on what a Treaty might involve. 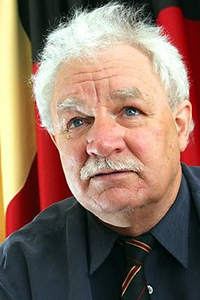 Michael Mansell is the author of Treaty and Statehood: Aboriginal self-determination (Federation Press 2016), which the Aboriginal Law Bulletin described as ‘compulsory reading for all… providing a gentle but definitive invitation to Australian people to revisit self, and to signify the type of nation Australia wants to be’. Since graduating in Law from the University of Tasmania in 1983, he has successfully campaigned for the repatriation of Aboriginal ancestral remains from Britain, Europe and the United States, recognition of Native Title, cultural fishing, hunting and land rights, as well as compensation for the Stolen Generations. Michael was previously the Legal Director of the Aboriginal Legal Service and is now Chairperson of the Aboriginal Land Council of Tasmania. Hosted by the University of Tasmania, this annual lecture honours the life and work of the late Japanangka errol West, an internationally recognised poet and scholar. Japanangka errol was a leading Tasmanian Aboriginal academic, known for his scholarship in the field of Indigenous methodologies and pedagogies. He articulated the Japanangka teaching and research paradigm, based on knowledge entrusted to him by Walpiri elder Japanangka Rex Granites and incorporating an understanding of the learning paths critical to the success of Aboriginal and Torres Strait Islander students in Western education.