John West's Launceston and where it went

Dr Eric Ratcliff OAM delivers the 33rd John West Memorial Lecture exploring how the town of Launceston has changed since the time of John West.

John West’s Launceston and where it went

John West came to Launceston at the end of 1838 and left in 1854. The lecture examines how the town had come to be, what it was like when he arrived, who lived and worked here, what it consisted of, and what it looked like. Was it a ‘company town’, dependent on government, or an English provincial town a long way from London, or a self-reliant and enterprising community, or something else? Was it in any way exceptional? What happened to it during West’s fifteen years of residence, and after his departure, what has become of it since, and what is happening to it now? 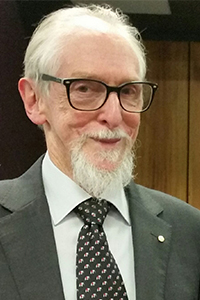 Dr Eric Ratcliff OAM was born in Launceston in 1938, completed secondary education at Launceston High School and graduated M.B.,B.S. from University of Queensland in 1964. He qualified as a consultant psychiatrist in 1976 and became a Fellow of the Royal Australian and New Zealand College of Psychiatrists in 1981. He was a long-serving General Councillor of the College, chaired a number of bi-national committees, and was awarded the College Medal of Honour in 2006. He has served a number of terms as Chair of the Northern Branch of the Royal Society. In addition to continuing psychiatric and medico-legal practice in Launceston, he is a recognised architectural historian, and has published on aspects of nineteenth century architecture and design in Tasmania and in England and on hospital and medical history in Tasmania. He was honoured with the O.A.M. in 2004 for services to psychiatry and architectural conservation.

Eric Ratcliff is the author of the four volume A Far Microcosm: Building and Architecture in Van Diemen’s Land and Tasmania 1803-1914.

Register to receive a recording of this lecture.

Register for the live event (Members and friends of the Launceston Historical Society only).

The annual John West Memorial Lecture is organised by the Launceston Historical Society
in partnership with the University of Tasmania.