The Vice-Chancellor, Professor Rufus Black will be launching Dr Louise Richardson Self’s book, Hate Speech Against Women Online: Concepts and Countermeasures at the Salon, the Hedberg.

Women are subjected to many forms of attack online.

Why are women so frequently targeted with hate speech online and what can we do about it? Psychological explanations for the problem of woman-hating overlook important features of our social world that encourage latent dispositions of hostility towards women, even despite consciously held ideals of equality in the abstract.

This book investigates the woman-hostile norms of the English-speaking internet, the ‘rules’ of engagement in these social spaces, and the narratives we tell ourselves about who gets to inhabit such spaces. It examines the dominant imaginings (images, impressions, stereotypes, and ideas) of women that are shared in acts of hate speech. By exploring aspects of ‘social imaginaries theory’ and applying it to the problem of hate speech against women online, this book illuminates why woman-hating has become such a prominent feature of this environment, and how we can make these spaces safer for women. 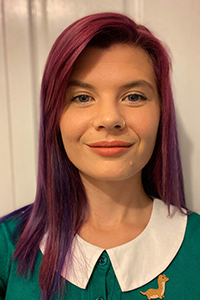 Dr Louise Richardson-Self joined the University of Tasmania as a Lecturer in Philosophy, and Gender and Diversity, in July 2015. She was an Australian Research Council Discovery Early Career Research Awardee from February 2019 to June 2022, funding from which enabled the publication of her book Hate Speech Against Women Online: Concepts and Countermeasures. She is also part of an ongoing Australian Research Council Discovery Project (2020-2022) researching tensions between LGBTQ+ non-discrimination and religious freedom.

In 2016 she was awarded the Max Crawford Medal, Australia’s most prestigious award for achievement and promise in the humanities, by the Australian Academy of the Humanities for her research and public outreach on marriage equality. In 2017 she was a Residential Fellow of the Humility and Conviction in Public Life project, hosted by the Humanities Institute at the University of Connecticut. In 2019 she was awarded the Australasian Association of Philosophy's Annette Baier prize, for an outstanding philosophical paper or book chapter published by an Australasian woman during the previous calendar year. Also in 2019, her research excellence was recognised with the UTAS College of Arts, Law and Education early career researcher award.

This book launch can be attended at the venue (at The Salon Hedberg) or online.  For online attendance by Zoom Webinar - please register HERE.