Celebrating a life on the land 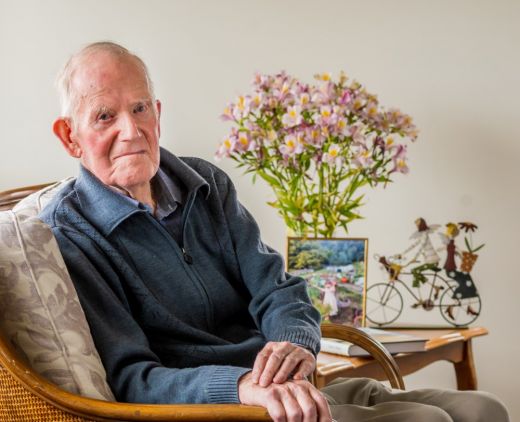 One of UTAS’s oldest donors is cultivating the next generation of Tasmanian farmers.

In the 1930s, there were no school buses in the rural Tasmanian township of Cressy. And so, at the tender age of nine, David McEwan left home to study.

The third-generation farmer recalls his time in Launceston at boarding school as challenging, both for his parents as they bid him farewell, and for a boy from the country finding his feet in the city.

“I think it taught me self-motivation and confidence,”  he said.

But his school life was cut short; the sudden death of his father forced him to return to the family farm. He admits he was “thrown in the deep end”, but with the help of neighbours and the government, he learnt to not only survive on the land but to thrive, using the latest research and farming methods.

Even now at 97, Mr McEwan has a thirst for knowledge  and an optimism for the future of the agricultural industry in the state.

While the first seeds in what would grow into a life-long contribution to the agricultural industry began on the family farm, Mr McEwan’s forward-thinking leadership was cultivated through his extensive involvement in the Tasmanian Farmers Federation.

Over the years, his hard work, enthusiasm and expertise earnt him accolades aplenty.

He held senior positions off-farm, including within the Australian Wool Corporation and CSIRO’s Division of  Animal Production in Sydney.

He describes becoming the first Tasmanian farmer to be awarded the Medal of Agriculture by the Australian Institute of Agricultural Science (Tasmanian Division) as a career highlight.

He was the 39th owner-woolclasser in the country and in 1992 he was made a Member of the Order of Australia for his service to the Australian wool industry.

Mr McEwan has always strived to give back, whether through his deep commitment to the community, sharing his passion for music, or in the agricultural industry.

One of the most powerful manifestations of his generosity and commitment to the future generation of farmers was the establishment, in 2017, of the David McEwan Scholarship in Agriculture. It provides an opportunity  for aspiring agriculture students to attend the University  of Tasmania.

“It’s my way of giving something back to the industry that has given me a wonderful life,” he said.

“There are huge challenges ahead and it’s going to take a certain amount of hard work and dedication, but there are wonderful opportunities in Australia.”

Over the years Mr McEwan has met many of his scholarship recipients, a special experience for both parties.

Febey Peace, the inaugural scholarship recipient, said she was proud and honoured to learn about Mr McEwan’s achievements.

“Mr McEwan seemed very humble after all he achieved from his hard work throughout his life,” she said.

The 2021 recipient of the scholarship,  Bachelor of Agricultural Science student Tomas Thiessen-Delaney, thanked Mr McEwan for his immense support.

“I will use this to allow myself to have the greatest impact  I can on the agricultural industry,” Tomas said.

Tomas’s goal is to find economically and socially efficient practices that are also environmentally sustainable.

“As an Indigenous person, I also hope to be involved in creating opportunities and resources in the industry that benefit communities and aim to close the gap of Aboriginal disadvantage,” he said.