Endemic animals being brought back from the brink by philanthropy 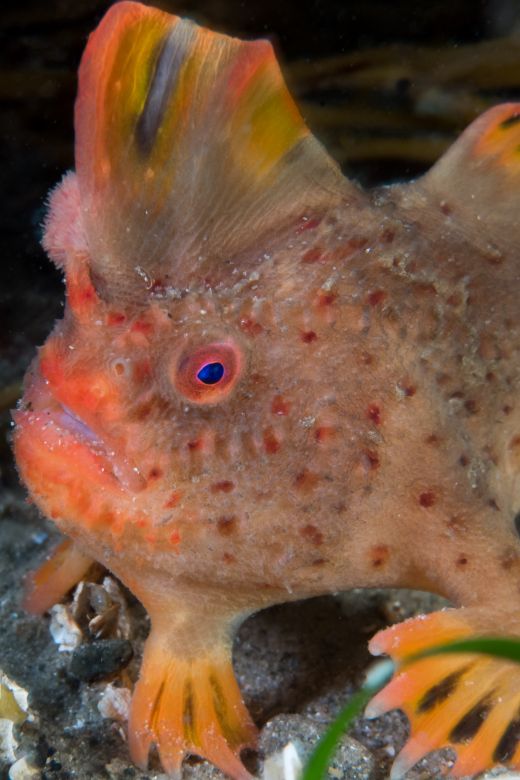 The need to protect Australia's iconic species has never been as great.

Those that survived the devastation lost large swathes of their habitat and face food and water shortages.

While Tasmania was largely spared, many of our endemic animals are still grappling with disease and changing environments.

Yet, amid the devastation, there is cause for optimism.

It's evidenced by the intention and action of donors to the University of Tasmania.

They are showing their commitment to ensure that our unique and diverse wildlife endures by funding cutting-edge research, conservation and management.

Take the Red handfish, known for using its hand-shaped fins to walk along the seafloor.

Endemic to the waters off south-east Tasmania, it is critically endangered with fewer than 100 adults thought to exist in the wild.

Habitat destruction and loss, pollution and a changing climate are thought to be the cause. In 2019, the Red handfish received a helping hand from donors.

The Handfish Conservation Project launched a fundraiser offering people the opportunity to name one of the last remaining fish.

Institute for Marine and Antarctic Studies (IMAS) researcher Dr Rick Stuart-Smith said this could be the last chance to save this species from extinction.

“It is hoped that being able to name a Red handfish will help engage people on the plight of the species by highlighting just how critical population numbers are,” Dr Stuart-Smith said.

At the time of publication, 20 fish had new monikers, ranging from Ginger Ninja to Knuckles.

Conservation efforts were also boosted last year when 50 Red handfish hatchlings were born at IMAS. The juveniles will be kept in a safe environment and released back into the wild, in the hope they will survive to maturity and reproduce.

Meanwhile, the University’s scientists are leading research into a deadly disease of wombats.

Sarcoptic mange causes hair loss, skin thickening, an extreme immune response, and ultimately death. It was introduced to Australia by European settlers and their domestic animals.

The team are investigating the use of a long-lasting treatment to control mange in wombat populations.

The University’s research into sustainable and effective ways to manage and prevent outbreaks is supported by philanthropy.

Last year the team announced that for the first time they had determined the population genetic structure of the bare-nosed wombat across south-east Australia to help understand the best way to conserve the species.

On a lighter note, Senior Lecturer in Wildlife Ecology Dr Scott Carver and his team made international headlines when they discovered how wombats produce their distinctive cubed poo.

The finding won a satirical Ig Nobel Prize – an international award for research that ‘makes people laugh and then makes them think’.

“Sarcoptic mange causes such severe suffering to these iconic Australian animals, but I am heartened by the advances we have made in treating this disease in wild wombats,” Dr Carver said.

“Philanthropic support has played a major role in helping in our research reach this point.

“I am confident we will soon have simple and feasible tools to cure individual wombats and manage the disease in small populations, which will be a wonderful animal welfare and conservation success.”

The mission to ensure there is a disease-free future for the world’s largest carnivorous marsupial in the wild, the Tasmanian devil, also continues to gather momentum.

The Save the Tasmanian Devil Appeal (STDA) has received incredible support from around the world, helping the University and key collaborators continue to unravel the mysteries of the contagious cancer, Devil Facial Tumour Disease (DFTD).

In 2019, the team continued their vital monitoring and tracking. Researchers also generated ground-breaking new insights into DFTD, which will help shed light on cancer development, evolution and immune invasion.

In addition, they developed new strategies for vaccine development, to prevent any further contagious cancers arising in the iconic animal.

Dr Rodrigo Hamede from the School of Biological Sciences said together with generous donors, they were building a brighter future for Tasmanian devils.

To find out how you can help support University research visit: utas.edu.au/giving