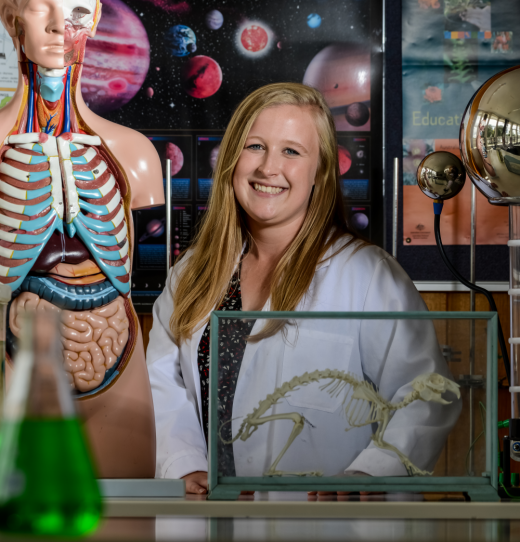 Tarnith Kelly’s students are the ultimate beneficiaries of her scholarship.

A cheer erupted in the classroom as the principal made an announcement over the intercom: their tiny school in the middle of Tasmania had won a national science competition, beating 35 entries from high schools around Australia.

For the first time, the group of students from Oatlands District High School, who were used to measuring their success by their sporting prowess, not their scientific skills, believed that they could do anything.

It’s a mindset encouraged by their teacher, University of Tasmania alumna Tarnith Kelly.

“I am a big believer in putting in maximum effort,” Tarnith said. “It was so rewarding when they won the Science Week Kids Hackathon; their confidence grew when they saw they could compete on the national stage.”

It’s moments like these that reaffirm Tarnith’s decision to become a teacher, instead of pursuing a career in accounting. But it is the smaller, quieter moments that keep her passionate about the profession.

Such as when a student finally understands a complex concept or completely changes their attitude towards maths and science and begins to reap the rewards.

Like so many Tasmanians, Tarnith faced twin barriers to pursuing a tertiary education: distance and dollars.

Born in Longford, the 24-year-old studied in Launceston before moving to Hobart to complete a combined science and business degree.

Her studies were supported by The George Alexander Foundation Relocation and Living Support Scholarship which provides students from remote and regional Australia who must relocate to study with financial support of up to $24,000.

Since 2013, 51 Tasmanians studying courses ranging from fine arts and pharmacy, to environment and education at our University have benefited from the generosity of  The George Alexander Foundation (GAF). In 2020, there were 24 students being supported by the scholarship. GAF continues to be a significant and very welcomed philanthropic partner.

George Alexander AM (1910-2008) set up the independent philanthropic foundation in 1972. He wanted to use his wealth to help others.

The English immigrant knew all too well how life could  be a lottery of financial fortunes and misfortunes.

Forced to leave school at 13, George’s family could not afford to pay for his motor mechanic apprenticeship, so he took a job in a bicycle shop before travelling to Australia to work on farms. He wound up in a garage in Geelong, Victoria.

Here, his drive to become a mechanic was reignited, and George worked by day and studied by night to complete  his training. A believer in the benefits of lifelong education, he continued his studies, becoming a lecturer and a successful businessman.

Tarnith said the scholarship helped set her up for success. Without it, she would have had to work to pay for her accommodation and living expenses in Hobart.

“I’m so grateful, the scholarship allowed me to work less,  so that I could focus on studies more, and it also meant I could continue volunteering in the community, including running camps for young people and washing clothes for the homeless,” she said.

“When you are given an opportunity like that it motivates you to make the most of it and that’s what I am doing.”

Read more stories about University of Tasmania students who have been supported by scholarships.