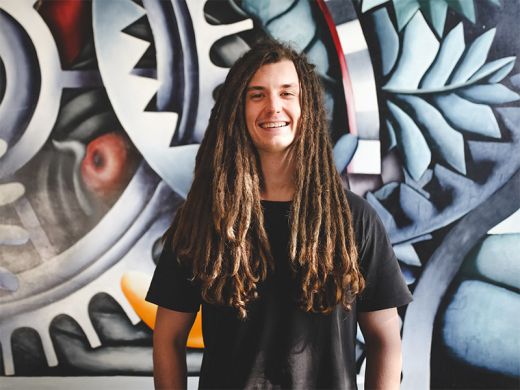 Lewis Nicholls was always surrounded by the power of the elements.

He grew up breathing air that’s considered the cleanest in the world.

Nearby the winds are so fierce they whip up some of the world’s biggest swells and make 80 metre wind turbines whirl effortlessly.

The North West Coast of Tasmania is perfectly placed to generate wind power, an ideal breeding ground for cattle, and attracts world-class surfers to ride the waves.

But like many remote Australian regions, it’s too small to accommodate the educational needs of teenagers, who must travel further afield.

Lewis first left the family farm - 550 acres of hilly green pastures in Marrawah - when he was 16.

He would need to live in Burnie during the week to study at college and return home on weekends.

It was at this point that he first felt the positive impact of philanthropy. Lewis received the University of Tasmania Woolnorth Wind Farm Springboard to Higher Education Bursary.

Since its inception in 2002 more than 900 students have benefited.

Lewis used his bursary to help offset the cost of travelling more than 260km a week for college.

Unsure of what to do next, he took a gap year, where he worked on the family farm by day and at the local pub by night.

It was during the late nights and early starts that he began to think about his future.

He was proficient in maths and science, passionate about all that was clean and green, and excited by the idea of studying electronics. A Bachelor of Engineering seemed the obvious choice.

“The worst part of the degree was that I would have to leave home and my parents and study in Hobart, but I was also pretty excited about the opportunity,” Lewis said.

“I went straight onto the University of Tasmania scholarship portal and started applying for scholarships.”

When he found out he would receive The George Alexander Foundation Relocation and Living Support Scholarship, he said it was quite simply: “awesome.”

The independent philanthropic group was established in 1972 by George Alexander AM (1910-2008) to support talented young people from rural and remote areas to overcome barriers to further education and fulfil their leadership potential.

“The Scholarship was $6,000 a year for four years, but later I found out I received an extension on my Springboard Bursary, which is now $3,000 a year for the next three years, which is out of this world.

“When I first moved to Hobart, I used some of the money to buy the basics I would need to live: a bed and study desk, as well as all the text books and stationery.

“I put the rest straight in a savings account and set up a recurring payment, so I was effectively getting paid a wage. It meant I didn’t have to work, I could just focus on my studies.”

Lewis said distance and finance were significant barriers to study.

“I most likely wouldn’t be at university if it I didn’t get a scholarship and I want to thank my donors because without them I don’t know where I would be.”

Now in his second year of Engineering, Lewis has worked out where his future lies, and it’s inspired by his childhood on the wild and windy west coast:

“I want to work in renewable energy, whether that’s solar, wind or wave,” Lewis said.