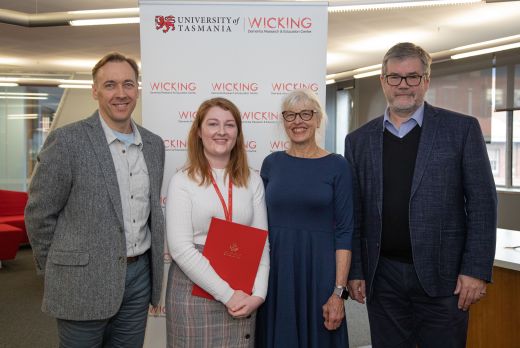 It was Dr Kelsey Hanson’s grandfather’s journey with Alzheimer’s that inspired her to pursue a career in dementia research.

A 2018 PhD student at the University of Tasmania’s Wicking Dementia Research and Education Centre, Dr Hanson’s research dedication has been rewarded with the inaugural Emeritus Professor Lloyd and Ann Smythe Prize in Dementia Studies.

The prize is generously donated by the family of Emeritus Professor Lloyd and Ann Smythe to recognise the achievements of PhD students undertaking research in dementia.

“I was so excited when I found out about the prize,” Dr Hanson said.

“Such support is extremely important and generous and shows that people not only care about finding a cure for dementia, but that they also care about the people behind the research.”

Dr Hanson’s paper published in Frontiers in Neuroscience looked at finding a therapeutic solution to the loss of connections between neurons, which lead to cell deaths and ultimately dementia.

And the results were promising.

“Like the human body has a skeleton, the neurons have their own skeleton called the cytoskeleton,” Dr Hanson said.

“I investigated what changes were happening to the cytoskeleton and if I could target those changes with a drug to stop the cell deaths happening and found a drug which actually prevented the loss of connections between neurons.”

The research team, in collaboration with the University’s Chemistry Department, now hopes to look at the development of a dementia specific drug to build on the promising results.

Dr Hanson said her research was driven by her family experience and supported by the wonderful support network at The Wicking Centre.

“My grandfather had Alzheimer’s disease,” she said.

“A lot of people have that family connection- and for me it drives my passion for research to try and find answers for anyone else who has gone through it.”

A family connection to dementia and passion for science was also a driving force for the family behind the Emeritus Professor Lloyd and Ann Smythe Prize in Dementia Studies.

Lesley Rowe instigated the award in memory of her parents.

Her father Professor Lloyd was a well-known Australian chemist and the University of Tasmania’s first PhD recipient, while her mother Ann was the family’s rock of support and eventually had to navigate living with dementia.

When Ms Rowe lost both of her parents last year, she felt the prize would be a lovely way to remember their legacy.

“To do something worthwhile for someone else to help them and say you appreciate their commitment to learning is great,” Ms Rowe said.