Antarctic Expeditions as an Analogue of Space: Space exploration involves critical risks to human health and wellbeing. UTAS, AAD and CARMM have collaborated extensively to date using Antarctic expeditions as a model for the health consequences of long-term confinement and isolation, as well as in the context of high-risk tasks in remote settings, involving medical, physiological and psychological impacts. The AAD has led this work with NASA in a range of studies using Antarctic expeditions as a space/Moon/Mars analogue. The physiological impacts of space exploration arise from the unique physical environment, including fluctuating gravity and exposure to ionising radiation, leading to a range of health effects. In addition, the impact of working in social isolation in extreme environments on health and disease is poorly characterised. This is important given consequences for human factors such as the immune system, microbiome, genome, psychological health and cognitive function.

Remote Medicine - Diagnostics and Support: UTAS, CARMM and the AAD have extensive experience in the development of medical and health practitioners to operate effectively in remote and extreme medicine environments. Building on decades of expertise on human life management, including collaborations with NASA and TRISH, we are further developing and optimising protocols and procedures to ensure safe and effective response to medical events in long-term travel and habitation in space. These developments and technological improvements will inform and benefit remote and extreme environments in Space, in the Australian Antarctic Program as well as terrestrial healthcare in Australia.

Space Medicine Knowledge Translation: To begin in 2021, the first Massive Open Online Course (MOOC) on Space Medicine, which has the potential to reach and inspire thousands of participants, and place Australia as global leaders in Space Medicine education and training.

Space Decompression Sickness (DCS): The spacesuits astronauts wear to perform extravehicular activities (EVA) are pressurised at a significantly lower pressure than the spacecraft that they exited from. In order to reduce the risk of DCS associated with EVA, astronauts undergo a period of gradual decompression to spacesuit pressure on board their spacecraft prior to their spacewalk. Longer periods of decompression carry a lower risk of DCS but are more inefficient. The Department of Diving, Hyperbaric & Aerospace Medicine at the Royal Hobart Hospital has extensive experience in development and testing of decompression schedules for divers and, following its recent multi-million dollar upgrade to now include both hypo- and hyper-baric capability, is now translating this experience into the testing of decompression schedules for use in Space and on the Lunar and Martian surfaces. 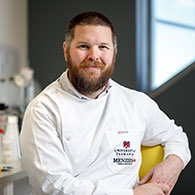