What is the French program about?

French is a major commercial and scientific language used across the European Union, spoken all over the world, and widely used in international relations and diplomacy, journalism and media, science and technology, the creative arts, and tourism.

A number of the world’s significant humanitarian organisations – the United Nations, International Red Cross, Doctors (and Reporters) without Borders, the Organisation for Economic Co-operation and Development, and the International Olympic Committee – use French as an official language, and more people in Africa speak the language than in Europe.

Not only is France the most visited country in the world, many other popular and exclusive travel destinations including Canada, French Polynesia, New Caledonia, Vanuatu, Mauritius, Reunion and the Seychelles, use French as an official language.

The rich culture that derives from French can be felt on every continent and spans medieval texts to contemporary arts – from Descartes to Simone de Beauvoir; the Palais de Versailles to the Tour Eiffel; Couperin to Ravel; Edith Piaf to Céline Dion; and Renoir to Magritte – making French a continually fascinating and useful area of study.

"We offer training in the skills needed for the efficient acquisition of a foreign language so that you will become increasingly independent in your journey towards effective communication with French speakers." 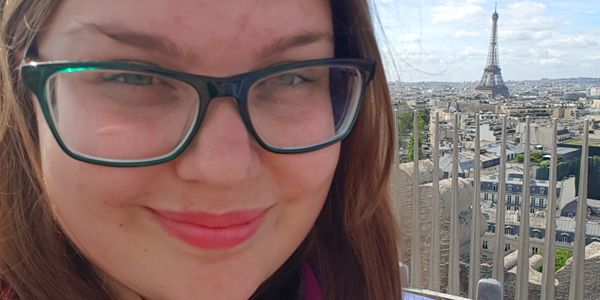 It's a big “oui” to the University Connections Program

"By the time I got to Year 12 I went, hang on a minute, I have done all this stuff in Year 11. I thought I’d like to challenge myself, get some more experience, and if it became part of my degree, even better. I got to start second year French straight away. I was credited my first year French into my degree."

Why study French with us?

For an experience to write home about, take part in our student exchange program that gives you access to a range of highly regarded partner institutions French-speaking countries and the chance to travel. Generous scholarships are also available.

Develop your ability in all four essential French language skill sets – reading, writing, speaking and listening – whether you are new to the language or have prior knowledge or experience.

Taught in English, our French Studies units give you specialist knowledge of society, culture, politics and economics in the French-speaking world.

Broaden your knowledge of global cultures and languages by combining your studies in French with programs in German, Chinese, Japanese, Indonesian and Asian Studies also available through the School of Humanities.

Undertake a major (eight units) in French on-campus in Hobart and Launceston, or anywhere online.

What careers relate to French?

With demonstrable language skills in French, you can enhance any career and open doors for employment overseas. Graduates from our French program have successfully applied for competitive scholarships in Europe, and pursued postgraduate study at universities in the region.

How can I learn French?

Many people who undertake a major in French do so to master the language itself, or as a valuable adjunct to other study in their undergraduate degree. French is also a popular choice as the Arts major in combined degrees with Business, Science, Fine Arts and Education.

This major (eight units) involves core and elective units in French which can be identified with HEF in the unit code. The program provides you with a structured pathway through French language learning (written and spoken), as well as units on modern French society, literature, politics and popular culture.

Your learning experience in French goes beyond the lecture and tutorials.

Our research in European Cultures & Languages

Our program has particular research strengths in both the innovative cutting-edge work of France and Germany’s young poets and in the classical writers who have made France and Germany famous for literature, drama and poetry.

Many of our research students work within these disciplines but we also actively advocate for projects that move beyond strict disciplinary boundaries, while being theoretically grounded. Our research strengths include the following areas: