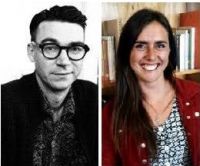 Hortle was awarded the Tasmanian Young Writer’s Fellowship, a prize which is awarded to a writer rather than a particular work, and which celebrates the strength and breadth of young Tasmanian writers. The judges reported that her “writing is diverse and assured; [she] shows great promise as a writer of both fiction and personal essay. Her fiction brings an almost visceral poetry to both every day and unusual settings, and her command of imagery is excellent. In her nonfiction she offers an energetic, honest voice portraying a particular picture of life as a young woman in this state, tying her subjective experience to broader questions and ideas.”

Ousten was awarded the University of Tasmania Prize for best new unpublished literary work by an emerging Tasmanian writer. The judges described his manuscript, Brodsky Dies, as “an engaging, intriguing, polished, and insistent literary work that masters both depth and detail and maintains its narrative tension right to the end. Ouston’s central character leads us to question death, worth, identity, and the meaning of literature and of a life well lived, as he traverses a world both vivid and well-constructed. The apparent ease with which this work is communicated belies a complex and carefully wrought structure. This is a novel of great confidence.”

The Premier’s Literary Prizes celebrate the richness of the Tasmanian literary sector and acknowledge the particular influence Tasmania has on the written work produced in the state. The other winners included: Into the Heart of Tasmania: A Search for Human Antiquity, by Rebe Taylor, which won the Tasmanian Book Prize for the best book with Tasmanian content in any genre; and The Museum of Modern Love, by Heather Rose, which won the Margaret Scott Prize for the best book by a Tasmanian writer.