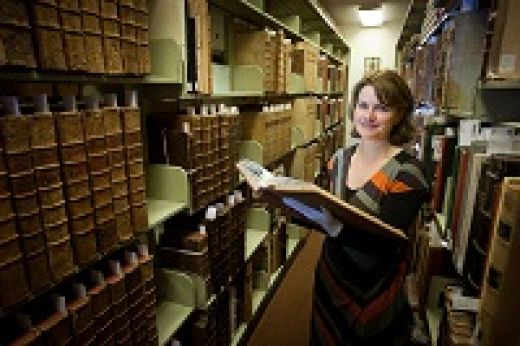 A book by University of Tasmania History and Classics Associate Professor and ARC Future Fellow Penny Edmonds has been shortlisted for the prestigious 2017 Ernest Scott Prize.

The $13,000 prize is awarded to work based upon original research, which in the opinion of the examiners is the most distinguished contribution to the history of Australia or New Zealand, or to the history of colonisation.

One of four books shortlisted for the prize, Associate Professor Edmonds’ Settler Colonialism and (Re)conciliation: Frontier Violence, Affective Performances, and Imaginative Refoundings is a transitional study which traces reconciliation and its discontents in settler societies, and the challenging issues grappled with today in Australia, but also in Aotearoa/New Zealand, Canada, and the USA.

Associate Professor Edmonds uses her knowledge of history and heritage studies to relate the past to the present and argues that in contemporary settler societies reconciliation has emerged as a potent and alluring form of utopian politics.

Thrilled to be shortlisted for the Ernest Scott Prize for her book, Associate Professor Edmonds said the book had been a decade-long journey for her.

“This book has been both an obsession and an emotional journey for me - as well as a nearly 10-year project during which I have  spoken to many generous and deeply engaged Indigenous and non-Indigenous people – elders, activists, artists, academics – working with and against reconciliation’s coercive frustrations and utopic promise,” she said.

“Too often, reconciliation is left as a matter for legal scholars, or sociologists - but as a Humanities scholar interested in performance, histories of emotion, and histories of Indigenous and settler relations and politics, I wanted to ask human questions around this vitally creative social phenomenon that speaks to our imagination.

“The performances I trace most crucially show us the ways that matters of history continually erupt in the present.”

She is also the recent recipient of the Academy of Social Sciences in Australia Paul Burke Early Career Award for Panel C (History, Philosophy, Law, and Political Science (2014)) for her 'multi-disciplinary approach to settler colonialism' and 'theoretical depth and originality.'

In October this year Associate Professor Edmonds will give the prestigious 2017 Trevor Reese Memorial Lecture at King's College, London, the key Australian history lecture hosted by the Menzies Centre for Australian Studies and held in association with the Institute for Commonwealth Studies.

The 2017 Ernest Scott Prize winner will be announced on April 4.