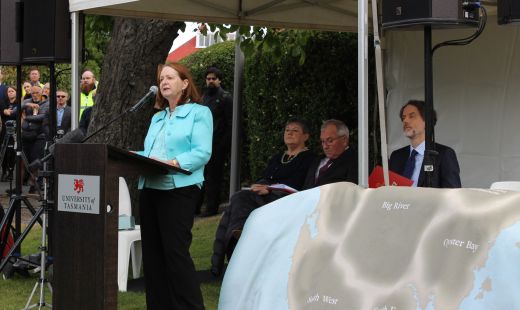 The University of Tasmania today (Wednesday 4 December 2019) made a historic apology for its role in wrongdoings towards Tasmanian Aboriginal people.

More than 600 people gathered at the original home of the University – Domain House – while the apology was made by Chancellor Michael Field and Vice-Chancellor Professor Rufus Black.

Aboriginal elders, leaders and community members from throughout the state were present to hear the apology.

“Traditionally, when we have looked back it has been in the spirit of celebrating the University and all that has been achieved during its history, it has been to reflect with a sense of pride, but that is not today,” Professor Black said.

“Today we reflect on the parts of our past we are not proud of.

“Today is a moment for humility, truth-telling, pain and accountability.”

Professor Black said the University had been built on the proceeds of war and dispossession.

Over the history of the University, Aboriginal bodies and artefacts had not been treated with the respect they were due.

“For too long the histories we taught hid the true story of war and genocidal behaviour. For too long the wisdom of Aboriginal people was not thought worthy of our academy,” Professor Black said.

“Today we also acknowledge that this has taken far too long. Here we are in the twenty-first century. Apologies have been far too long in coming. This is unacceptable and we come today to put that right.”

Chancellor Field and Professor Black made the formal part of the apology in both English and palawa kani, the Aboriginal language painstakingly pieced together from historic records and recordings.

You are standing on lutruwita (Tasmania) Aboriginal land, sea and waterways.

This is Aboriginal country, inclusive of the land, sea and river that you see from here.

The palawa people share a sacred link with nipaluna country of Hobart and possessed these lands for sixty millennia.

As you pause to reflect on the depth of culture, history and wisdom on this island, and you connect with the place, kunanyi above and the river below, remember and honour those that came before.

The University of Tasmania acknowledges the deep wrongs committed against the palawa people in our name and unreservedly apologises for them.

Palawa presence will be forever imprinted on these lands and waterways.

the university of lutruwita acknowledges the deep wrongs committed against the palawa people in our name and unreservedly apologises for them.

Pictured: the University's Pro Vice-Chancellor - Aboriginal Research and Leadership, Distinguished Professor Maggie Walter, who played a crucial role in bringing about the official apology. Seated from left: Theresa Sainty, who made the Welcome to Country; the Chancellor, the Honourable Michael Field AC, and the Vice-Chancellor, Professor Rufus Black.