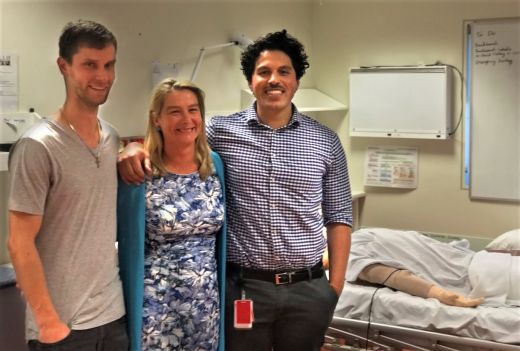 Medical students who graduated from the University of Tasmania during December are kickstarting their careers as North-West doctors this week.

Twelve students who completed their higher education at the Rural Clinical School in Burnie are remaining in the region to commence hospital residencies.

The interns will undertake their orientation in Burnie before beginning three-month rotations in places that include King Island and Queenstown.

Associate Professor Dr Lizzi Shires, Director of the Rural Clinical School, said it was exciting to have students staying on to further their education and training.

“We are pleased to have so many of our graduates staying on as interns. Some of the interns grew up on the North-West, and others came here for placement and are keen to stay on.

“Clinicians enjoy working with young doctors they have trained as it makes the transition very smooth.

“We are very proud our graduates have developed an interest in rural health, a love for the North-West, and a commitment for supporting this region’s communities,” Dr Shires said.

“Over the next 12 months the group will be furthering their training in emergency departments, surgical and medical wards and local practices, while also gaining insight into areas of medicine that include orthopaedics and rehabilitation medicine.”

The students graduated from the Tasmanian School of Medicine, which is part of the College of Health and Medicine at the University of Tasmania.

As part of Orientation Week, Dr Daniel Aualiitia, who undertook his internship in 2019, was recognised with an Intern of the Year award for acting as a role model and inspiring others.

A Resident Medical Officer of the Year accolade was awarded to the region’s top-performing junior doctor, Dr Nathan Vos.

The awards were presented on Wednesday in honour of Dr Paul Huang who was a radiologist at the North-West Regional Hospital for many years until the early 1990s, and Dr Richard Buttfield, a former Director of Medical Services at the hospital and CEO of the North-West Health Region in the early 1990s.

Associate Professor Kathleen Atkinson, Executive Director of Medical Services for the North West Region Tasmanian Health Service, said recruitment and retention of doctors to rural and remote areas is a daily challenge for Tasmania and to see students who studied in Tasmania, who now want to work in local hospitals is a great outcome.

“These awards also provide our local medical teams, who have worked with the interns and resident medical doctors, the opportunity to nominate and recognise those who have demonstrated excellence in clinical management, professionalism and communication.