The Tasmania Law Reform Institute sought public feedback on possible reforms to Tasmanian law to respond to sexual orientation and gender identity (SOGI) conversion practices. SOGI conversion practices are known to be demeaning and highly damaging to LGBQTA+ people and several jurisdictions have already banned or are in the process of banning them. The Institute is conducting an inquiry about the appropriate law reform options for Tasmania.

This Inquiry received a higher than expected level of public interest and resulted in a very high number of community submissions. TLRI is now processing and considering the large volume of submissions and additional evidence and consulting with peak health, medical and statutory bodies on options for law reform. This process will take time and has affected the timeline for this inquiry. TLRI will post a new schedule for reporting as soon as possible on this page.

Submissions responding to the Issues Paper (PDF 1.9MB) prepared by the Institute to inform community consultation could be made either online or in writing.

Responses to the questions in the Issues Paper (PDF 1.9MB) were accepted by online survey, email or via post. 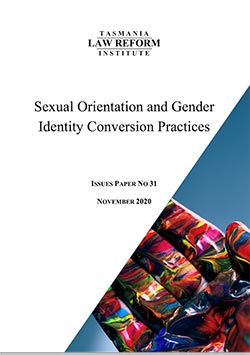 What do we mean by conversion practices?

SOGI conversion practices are attempts to change or suppress a person’s sexual orientation or gender identity; to ‘convert’ someone who is homosexual or transgender into a heterosexual or cisgendered person. They are often based on pseudoscientific ideas that non-conforming sexual orientation or gender identity is the result of dysfunction, trauma, or brokenness, and can be ‘healed’, suppressed or changed.

Why are conversion practices an issue of law reform?

Medical and psychological practitioners have long accepted that LGBTQA+ status is not a physical or psychological disorder in any sense. Clinical studies indicate that SOGI conversion practices therefore do not work and also cause trauma and long-term harm to people exposed to them.

A range of peak national and international bodies have therefore declared such practices to be unscientific degrading, dangerous and contrary to human rights and have called for them to be banned.

What is the point of this consultation?

The TLRI Issues Paper is the basis for a public discussion in Tasmania about whether and how Tasmanian law should also be reformed in response to contemporary evidence about the harm caused by SOGI conversion practices. Responses will be used in a Final Report and recommendations, which will be provided to the State government.

For more information or queries contact Law.Reform@utas.edu.au or call 6226 2069.