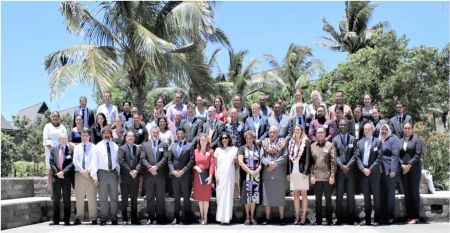 In February of this year students Siobhain Galea and Rosie Evans travelled to Fiji, where they assisted the Convention Against Torture Initiative in convening a seminar among Pacific states.

Siobhain and Rosie were offered this opportunity as members of the International Justice Initiative, a program in the UTAS Law Faculty which enables students to gain experience in international public interest law.

The seminar aimed to assist ratification and implementation of the United Nations Convention Against Torture in the Pacific.

It allowed over sixty delegates to share stories of good-practise, strengthen the Convention Against Torture framework, reflect on national laws and discuss the legislative challenges to implementation of anti-torture laws.

“Torture is still a really big issue even in developed states and is most likely to occur in police brutality situations,” Siobhain said.

“The aim of the seminar was to bring everyone into the same room to discuss the successes and challenges of anti-torture legislation.

“The delegates discussed the definition of torture, the obligations that the courts and the police force have to uphold it and what laws are the best laws for governments to implement.”

Siobhain and Rosie assisted the Convention Against Torture Initiative before, during and after the seminar with legal research and administrative support.

In this preliminary research, they were assisted by other members of the International Justice Initiative, namely, Alice van Galen.

“We did preliminary research on the laws that the Pacific states had currently and whether they meet the obligations under the Convention Against Torture,” Siobhain said.

“During the sessions we helped with logistics and note taking.

“Rosie and I have written a draft report on the seminar based on the notes that we took. This summarises the key things that are important to assist in the ratification process, as well as the key challenges.”