Creating an artificial underwater forest to support marine life? We can kelp with that.

The array of artificial reefs (made from concrete pavers) covers more than a hectare. It’s thought to be the first time an experiment of this size with transplanted kelp has been conducted anywhere in the world.

These forests are important because they support highly productive and biodiverse ecosystems, including important commercial species such as rock lobster and abalone.

The team, led by chief investigators Professor Craig Johnson and Dr Jeff Wright, has installed 28 patch reefs at a depth of seven metres in Mercury Passage between Maria Island and the Tasmanian mainland.

“This work will measure the capacity for kelp to replenish itself as forests thin out and become increasingly patchy with ongoing ocean warming,” Professor Johnson said.

We hope that by understanding the essential features of kelp forests we can help to maintain them, and the services they provide, in response to future threats and continuing ocean warming.

“We also want to gain a better understanding about how changes to our kelp forests may flow on to affect the other organisms living in those forests.”

“Everything really takes off in summer as the water starts to warm up and the reefs are flourishing. There are plenty of small fishes and octopus on them, along with juvenile lobsters and fishes which settled onto our reefs when they were still in their larval stages,” Institute for Marine and Antarctic Studies (IMAS) PhD researcher Cayne Layton said.

“We’ve have had some losses, just as occurs in natural kelp forests, but we’ve been able to replace those with some more healthy kelp.”

The understorey algae beneath the kelp canopy – the equivalent of the ferns, shrubs, and small trees in forests on land – is continuing to thrive. 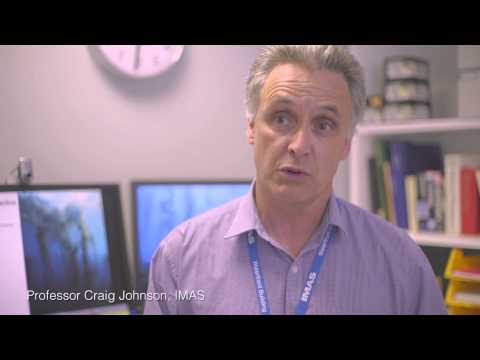 The concrete pavers are barely recognisable on most of the patches as they are completely covered by oysters and barnacles, and a colourful array of understorey algae, sponges and sea squirts, Mr Layton said.

A healthy understorey environment is important because it is the habitat for smaller animals such as shrimps, molluscs and juvenile fishes and lobsters. It is also critically important for the kelp itself, because the understorey is where juvenile kelp spores settle and spend the first part of their lives.

Mr Layton said that the experimental side of the project is also producing interesting results.

“It’s encouraging for us as researchers to see that there are clear differences in the various reef communities which have developed, related to the size of the patches and the density of kelp growing on them.”

The research team is also securing invaluable experience in the transplanting of kelp.

In the future this may be a method used to restore and rejuvenate areas which have suffered kelp loss due to impacts such as marine heatwaves, increased nutrients, or invasive sea urchins.

“In spring, right after the winter reproductive period for the kelp, we noticed that juvenile kelp were appearing on some of the larger reefs,” Mr Layton said.

“These reefs therefore appear to be self-sustaining, with losses offset by the natural recruitment we are seeing.

“This obviously is a critical issue for similar kelp transplanting projects which are aiming to restore or rejuvenate degraded kelp habitats.”

This research is conducted through IMAS, and is supported by the Australian Research Council and the Holsworth Wildlife Research Endowment.

Closing the evidence to practice gap in healthcare

This research is making sure you get the best possible care in hospital.

Putting a value on an ecosystem is notoriously difficult, but incredibly important.

This is the future of forensic science

With the advance of technology and our understanding of DNA evidence, forensic science is making all kinds of things possible for crime scene investigators. But is human error holding us back?

A PhD is an amazing learning experience. Here's some tips to help you on your way.

Our business development and technology transfer team would like to help get you involved.

View information about our research degrees, find a supervisor, or enquire now.