A team from the University of Tasmania has produced the State’s first home-grown PlayStation®4 game, Party Golf, which was launched to the gaming world today.

Developed by staff and students from the University’s Games Research group, trading as Giant Margarita, Party Golf was born during a 48-hour game jam over Easter in 2015.

Producer – and Senior Lecturer in the School of Engineering and ICT – Dr Kristy de Salas said the group had set themselves the challenge of hosting a party at the end of their jam, and invited friends around to playtest the game.

“The party was not a flop, since Party Golf turned out to be incredibly fun to play, even in the initial prototype,” Dr de Salas said.

From that feedback, we knew we wanted two things: to give the player as much freedom as possible to play the game in their own way, and to never take the game too seriously. 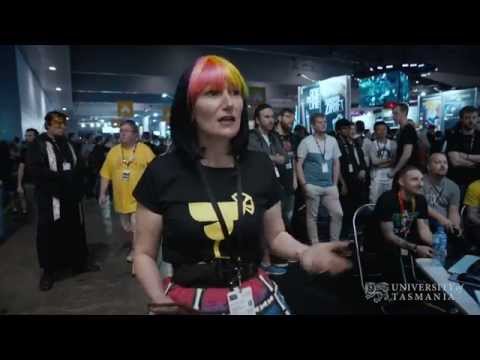 UTAS Games and Technology major staff and students at PAXAUS15.

The team launched a Kickstarter campaign to secure the funds to polish the game to a high standard, and hired local artists and sound designers. Together with an investment from Screen Tasmania, the team was then able to take Party Golf to gaming conferences.

Sony came and played our first prototype of Party Golf at the PAXAus gaming show in 2015, and once they saw the game running and the excited audience response to it, they immediately offered to support us with development hardware, which is highly sought after, Dr de Salas said.

A still from Party Golf shows its vibrant colours.

Giant Margarita is a core tenant of Enterprize Tasmania’s Hobart innovation hub, which is based at the former Mercury building on Macquarie St.

Together with the Launceston hub, the Hobart site is the first of a network of planned hubs across the state, designed to provide entrepreneurs with the space and support to turn innovative ideas into reality.

The first two hubs have been established through a public-private partnership between the State Government, the University of Tasmania, and a range of private sector sponsors and special interest groups such as Start UP Tasmania.

University Apartments: evidence of the power of higher education to deliver new futures

The Lions are getting stronger every time they step onto the field.

Keen to create your own games?

Study Computing and IT.

Around the world, employers are looking for professionals with knowledge and skills in this area.

A Belgian farmer moved a rock and accidentally annexed France

From paddock to pallet to plate

How we will trace our future horticultural exports

From Tasmania to the world, and well beyond